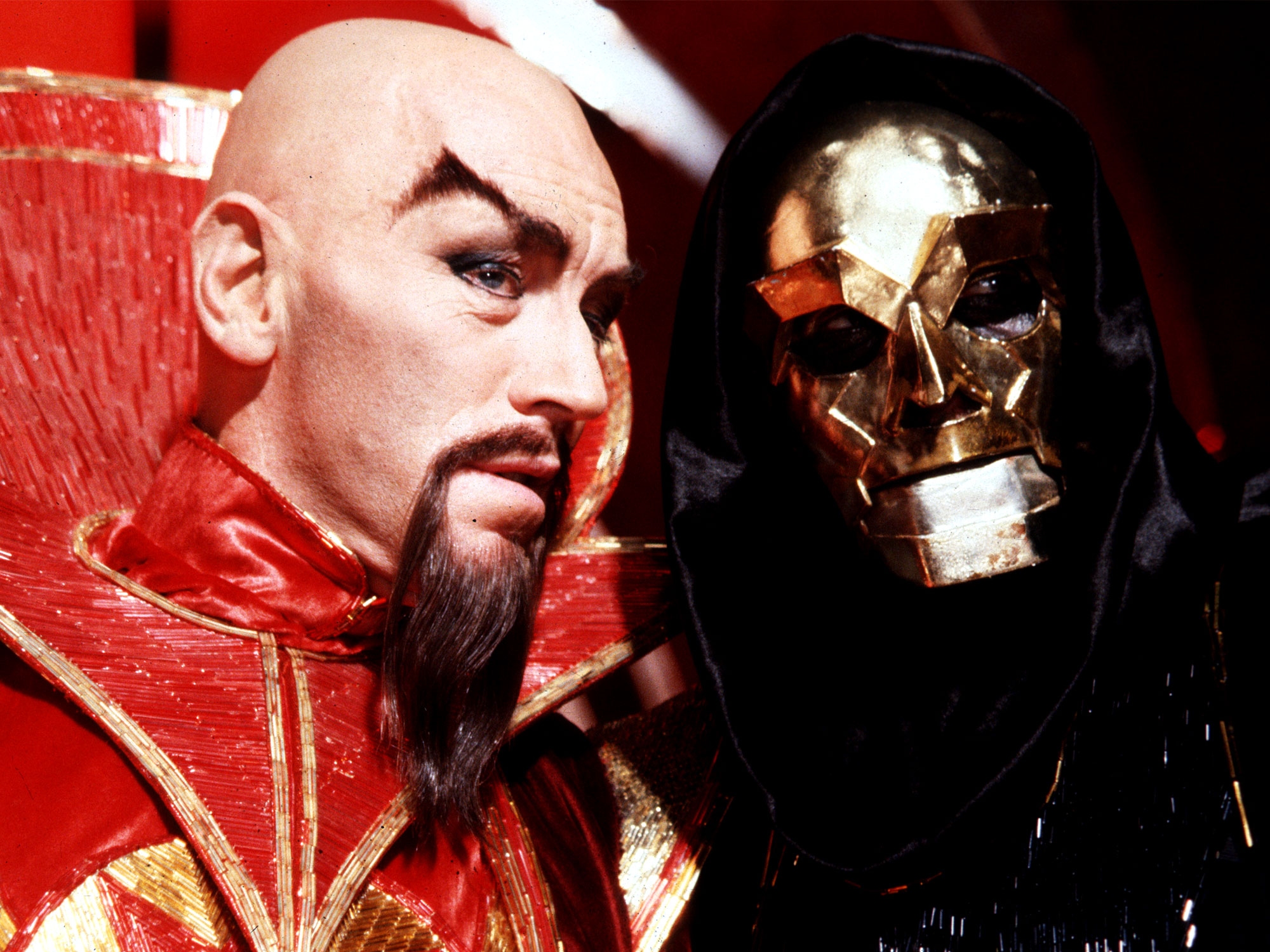 In the meantime it inspired the costumed iconography of Superman and the Batman, while spawning three film serials starring Buster Crabbe in the ’30s (each subsequently condensed and re-edited into feature length), various TV versions (both live-action and animated), the Turkish rip-off Flash Gordon’s Battle in Space, the pornified Flesh Gordon, as well as games, comics and novelisations.

Yet while the influence of this cartoon hero spreads itself throughout the imaginative space of 20th-century culture, without question its most famous instantiation is Mike Hodges’ feature-length adaptation from 1980.

Coming some 45 years after Flash Gordon first appeared in newspapers, and after a lengthy pre-production where at different times Federico Fellini (in the film, the pet of Ornella Muti’s Princess Aura is named ‘Fellini’ as a tribute), Nicolas Roeg and Sergio Leone were in consideration to direct, Hodges’ film is heavily marked with its own belatedness, but makes of that a peculiar kind of virtue.

Like the ’60s television version of Batman (whose developer Lorenzo Semple, Jr also served as screenwriter for Flash Gordon) or like Randal Kleiser’s Grease, Hodges’ film casts its knowing, winking eye over a world of outmoded values and passé ideas, bringing a self-aware irony to all the old-world sincerity and aw-shucks decency that Flash himself (played by blonde beefcake Sam Jones, with voice actor Peter Marinker dubbing his dialogue) embodies.

George Lucas made Star Wars after failing to acquire the rights to Flash Gordon from producer Dino De Laurentiis, and his indebtedness to Flash’s adventures is plain to see throughout his own space saga. With Flash Gordon, Hodges was similarly looking back to the future, revisiting a property from a long time ago while bringing it into a post-Star Wars, post Superman: The Movie universe, where mattes, compositing and models had brought a new mode of realism to the blockbuster.

Yet Flash Gordon gets to have it both ways: on the one hand, its opening credits flash through frames of Raymond’s cartoons in a gesture towards the film’s comic-book origins (a trick subsequently appropriated for the Marvel Cinematic Universe), its heroes and villains are all campily cartoonish, and its lurid colours and Danilo Donato’s lavish production design are drawn straight from the comic strip and 1930s serials; while on the other hand, it is very much a product of its time, updating Flash from elite polo player to New York Jets quarterback, introducing Queen’s rousing rock opera soundtrack to complement all the on-screen space opera, and even having the upper fin of War Rocket Ajax emerge from the clouds in an incongruous homage to Steven Spielberg’s Jaws. 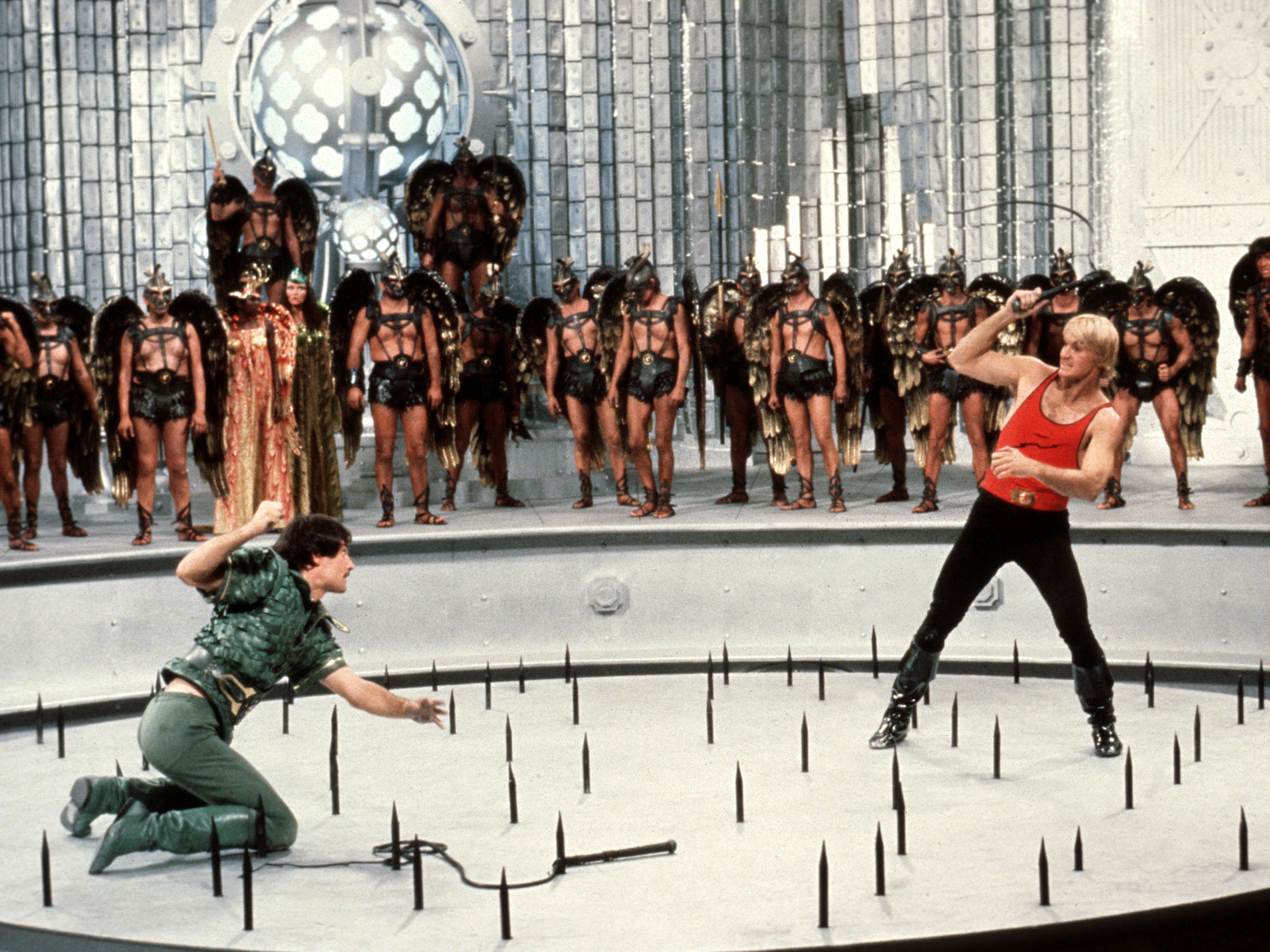 As earthlings Flash, Dale Arden (Melody Anderson) and mad scientist Hans Zarkov (Topol) find themselves drawn into space to save the world from Emperor Ming the Merciless (Max von Sydow) of the planet Mongo, they must reunite warring factions – Prince Barin (Timothy Dalton) and his Arborians, Prince Vultan (Brian Blessed, dialing it up to 11) and his winged Hawkmen – to fight Ming’s forces of fascism (expressly compared to the Nazis, who threatened Zarkov’s Jewish family in World War Two).

It is a clash of titans, with gormless good guy Flash bringing the humanity and the self-sacrificing deeds of derring-do. With its treacherous quicksand, brain-wiping torture, forced royal wedding and even the line “As you wish” all looking forward to Rob Reiner’s The Princess Bride, this is a mad, colourful swash-buckling space saga, where old-school swords, clubs and lashes feature alongside space-age lasers.

Shot in glorious Technicolor, Flash Gordon presents space not as a dark vacuum, but as a psychedelic vista of chemical swirls and polychromatic clouds. Hodges’ comic book caper is all cheeky, cheesy fun, with moustache-twirling bad guys, strong-jawed heroes, and every line dripping in self-conscious absurdity (not to mention innuendo). And unlike its more serious source text, it is all delivered with a nod and a smile, as reassurance that it knows exactly what it is, and that its gurning, hamming cast are having a blast.

Perhaps this explains not only the film’s initially mixed reception in the then irony-averse America, and its more immediate canonisation in the UK with its long-standing pantomimic traditions and its adoration of savvy naffness. Over the intervening decades Flash Gordon has acquired cult status, and remains one of cinema’s purest joys, with all its redundancy and belatedness built right into its knowingly retro aesthetic. After all, there is no more dynamic tense than the future-in-the-past.

Sadly a falling out between Jones and De Laurentiis put paid to planned sequels, ensuring that Hodges’ film remains an eccentric singularity, doomed to have its afterlife only in the imagination. In this respect it is not unlike Andrew Stanton’s John Carter, another exquisitely fashioned old-school space epic which failed to spawn a promised franchise. This brings things full circle – for it was only when King Features Syndicate proved unable to secure the rights to Edgar Rice Burroughs’ ‘John Carter of Mars’ stories that they turned to Raymond to invent the Carter-like figure Flash Gordon instead.

Flash Gordon is in cinemas from 31 July, and available in a Special 40th Anniversary director-approved 4K restoration (scanned from the original 35mm negative) on Blu-ray, DVD, UHD Collector’s Edition, Steelbook and digital from Studio Canal on 10 August.