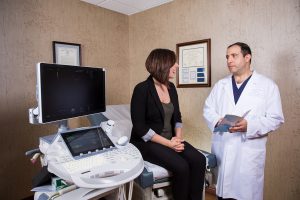 For those struggling to become pregnant, scrolling through social media can bring up mixed emotions. As you look at pictures of smiling babies taking their first steps or puckering at their first taste of a lemon, there is happiness but also a deep sense of yearning.

But you keep scrolling until a post stops you in your tracks: a friend announced she is pregnant, and she says it’s all thanks to the people at Reproductive Medicine Associates of Florida.

As the stigma around infertility loosens, more couples have been willing to share their stories, and it’s a step in the right direction, says Dr. George Patounakis, medical director of Reproductive Medicine Associates (RMA) of Florida.

“We rarely see people who hide the fact that they take blood pressure or cholesterol medication, but when it comes to infertility, there are plenty of couples that won’t speak up. However, I’ve seen a change from when I first entered the field, especially in online communities, where people share their experiences and it helps others feel less isolated.”

However, if a person has certain symptoms or a medical history—such as irregular periods or if a man had previous surgery on his testicles—that may warrant a faster evaluation, Dr. Patounakis says.

Being chosen to handle this emotional and personal moment with couples is not lost on Dr. Patounakis. Not only is he fulfilling his role as a medical provider, but his patients become like family.

“We pride ourselves on a hands-on approach. Patients interact directly with me and I’m constantly communicating with them and giving feedback,” he says. “You won’t be seeing a different face every time you walk in. As patients come into the office over the course of their treatment, we get to know them and they get to know us. Patients feel supported by everyone in this office, from the front desk and the clinical assistants, to the nurses and myself.”

Comfort with your specialist is as important as their qualifications, and RMA exceeds standards. Locally based in Lake Mary, RMA is a nationwide name with 19 locations across the country. Every clinic applies the same evidence-based approach to fertility solutions, with a state-of-the-art in vitro fertilization (IVF) lab, and a reputation as a global leader in assisted reproductive technology, fertility care, research and innovation.

“It is recommended to select a clinic that is academically oriented,” says Dr. Patounakis. “You want to know that they are doing their own research and staying on the cutting edge of fertility treatment. They should also be reporting their IVF outcomes to the Society for Assisted Reproductive Technology (SART). These are all important elements to research as you explore options, and RMA continues to innovate and apply the latest technologies to achieve the safest pregnancies in the shortest amount of time.”

Then there is the experience that Dr. Patounakis brings to the equation. Originally, his career seemed to be headed toward electrical engineering, but he was pulled toward health care and he received his M.D. from Rutgers Robert Wood Johnson Medical School in New Jersey and completed his OBGYN residency at Thomas Jefferson University Hospital, where he served as an administrative chief resident.

He then completed his fellowship training in reproductive endocrinology and infertility from the National Institutes of Health in Maryland.

Dr. Patounakis felt a kinship with women’s health in particular while in medical school. During an anatomy class, a discussion on the female pelvic floor and the causes of stress urinary incontinence presented an anatomical engineering problem.

It piqued his interest, understandably so, and it led him down that path. Over time, his interest in reproductive medicine was further influenced not only by his experiences in school, but by hearing about his own family members who were going through infertility.

Since joining RMA in 2017, Dr. Patounakis has come to witness and be a part of many miracles for people who thought they’d never have children of their own.

“I’ve had more than one example of patients who sought fertility treatment elsewhere and were told to go the route of donor eggs or use a gestational carrier and failed,” he says. “They came here for a fresh set of eyes and in these cases, these patients were able to use their own eggs and carry themselves.”

It’s this unparalleled level of respect and support that patients can expect from RMA on their journey, and ideally one they are willing to share in the chance it will give others the courage to take their own first steps toward parenthood.

Dr. George Patounakis, medical director of Reproductive Medicine Associates of Florida, guides couples through fertility treatment with an approach based on innovation and understanding. […]