After losing their young son to a congenital heart defect, one area family has kept his memory alive by creating a foundation to help others affected by the disease. 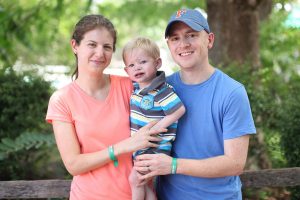 Trey and Nicole Flynn’s lives were turned upside down in 2011 when they went for Nicole’s 20-week ultrasound. They walked into their appointment excited to find out the gender of their baby—it was a boy—but the technician told the couple there seemed to be an issue with his heart. They were sent to Winnie Palmer Hospital for Women & Babies to find some answers.

“He had a hole in his heart, which wasn’t uncommon,” Trey Flynn recalls. “At Winnie Palmer they told us he had a heart defect, and there were other concerns as well.”

Shortly after, Holden was born with congenital heart disease. “He had a major heart defect specifically described as a single ventricle type heart, his heart only acted with a singular chamber in which it had to pump blood in and out through that one valve,” Flynn says.

Holden had four operations on his heart to repair it in 2012 and spent a good portion that year in the hospital. He had a transplant the following year, but his heart continued to deteriorate. Holden went into cardiac arrest in 2014 as a result of the depletion of his heart and sadly passed away.

“His heart was not in good shape,” Flynn says. “After losing Holden, we created Yellow Brick Road to assist other families in the hospitals.”

Officially known as Yellow Brick Road: the Holden Flynn Foundation, the organization provides varied support to area families affected by congenital heart disease. It has also provided financial assistance for those facing long hospital stays so they can focus on recovery and not on paying the bills.

When the Flynn’s first started the foundation, Trey says one of the most important things was to spread information and raise awareness about congenital heart disease because not many people were aware of it.

“It’s just one of those boutique diseases not a lot people know about, but it affects one in 100 people,” he says. “We were very scared. We lost Holden and we were worried people would not remember him. It’s one of those things where it’s all you think about. What do I do?

“We’ve helped a lot of families at all three major hospitals, but we will help any family at any hospital out of the area, as long as the family is from here locally,” Flynn continues. “We cover travel costs, we’ll pay for reimbursement for hospital expenses via travel, lodging, medical bills and food.”

Another thing they do is provide care bags to patients in hospitals to let them know they are supported and cared for through this difficult time, while also providing as much information as they can about this disease to better educate families.

Yellow Brick Road has also introduced The Wagon Project, where they provide every hospital in the region wagons for patients to ride in the hallways. They are built in such a way that an IV can come along for the ride, and every wagon can be sponsored and have a different theme, like race cars, fire trucks and animals.

“When our son was 2 years old, to pass time in the hospital, we’d walk him around the unit all day in a wagon just so he could move around because he was very immobile. He could barely stand on his own because his heart was in such rough shape,” Flynn says, adding how much his son loved taking those rides.

Flynn says the foundation has gotten involved on a national level, as well. “We go to Washington, D.C. every year and lobby for congenital heart disease. We were involved in the passing of the Congenital Heart Futures Reauthorization Act [in 2018]. Holden’s story was relayed on the floor of the House of Representatives where U.S. Rep. Gus Bilirakis introduced the House to the bill for a vote. He mentioned Holden on the floor.”

Flynn says they receive an incredible amount of support, and this foundation wouldn’t be as successful without the help of co-founders Juan and Sara Gonzalez. They, too, lost their son, Monroe, to congenital heart disease—just 12 days after Holden passed.

“We met in the hospital, would hang out in the hospital and became close friends afterward, and we’re still close to this day. They have worked tirelessly in helping build the foundation,” Flynn says. “Without them we wouldn’t be who we are.” 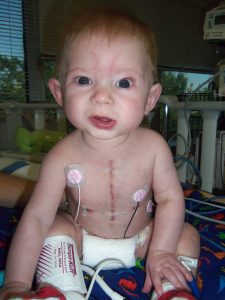 The Tin Man
The story of the “Tin Man” started before Holden was even born. When the family first received the news of his heart issue, they were understandably distraught, but Flynn says they picked themselves up quickly.

“We told ourselves, we need to stop moping around—we need to be positive and came up with the nickname, the ‘Tin Man.’ The Tin Man wasn’t perfect, he didn’t have a heart. I said, our child has a heart that doesn’t work right. He’s the Tin Man. We talked to everyone we knew and were overwhelmed with support. T-shirts were made of the Tin Man and the Yellow Brick Road.”

The same day, Flynn came across an advertisement for the Winnie Palmer’s Miracle Mile Race and an idea clicked in his head.

“They had a NICU race. I knew the proceeds weren’t going directly toward Holden’s cause, but we knew he would most likely be in the NICU for who knows how long,” he says. “We decided to create a team and name it Tin Man and we raised about $11,000 for the NICU. We beat the previous race by about $7,000 and had 130 runners come out and run with us. It was an amazing response which led to the foundation. That first race really set the tone for what we were able to do.

“To see the reaction to our foundation from the hospitals, city leaders, local friends and family across the spectrum reminds us that even though Holden isn’t here anymore, people do remember who he is and what he is about. It’s one of those things as a parent I look back and say, ‘He might not be with us anymore and it sucks, but at the moment, we’re doing everything we can to finish and continue the fight.’”

For more information about Yellow Brick Road, go to YBRF.org.

After losing their young son to a congenital heart defect, one area family has kept his memory alive by creating a foundation to help others affected by the disease. Trey and Nicole Flynn’s lives were turned upside down in 2011 when they went for Nicole’s 20-week ultrasound. They walked into their appointment excited to find […]