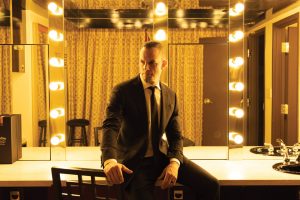 Best known as a founding member and lead guitarist for accomplished bands such as Creed and Alter Bridge, as well as lead vocalist and guitarist for his own band, Tremonti, with whom he has released five successful albums, it’s easy to see that Mark Tremonti rocks. Now, with his latest album, a collection of Frank Sinatra cover songs, Tremonti is not only showing a different side of himself musically but also revealing a very generous and giving side as well.

After his daughter Stella was diagnosed with Down syndrome in utero, the doting father of three felt inspired to venture into a new style of music, benefitting charity. Mark Tremonti Sings Sinatra has received rave reviews and Tremonti has generously donated all profits from the album to the National Down Syndrome Society.

Orlando Family Magazine recently spoke with the Grammy winner about this new venture, the organization he created called Take A Chance for Charity, and his loving family.

How did your most recent album, Mark Tremonti Sings Frank Sinatra, come to be?

I’ve always been such a huge fan of Frank Sinatra. I spent a few years just practicing his songs kind of as a hobbyist singer. Then when my daughter Stella was diagnosed with Down syndrome, before she was born, I decided to record a Frank Sinatra record and do it for charity, since he was such a charitable man.

Is it true you actually worked with members of Frank Sinatra’s band?

Yeah, I called my manager and I said I wanted to find some local musicians and just start playing local venues and record an album of Sinatra songs. He said, “Why don’t we do one better—my guitar teacher growing up was one of Frank Sinatra’s touring guitar players.” So, he was the one who got me the introductions to Mike Smith and Dan McIntyre, who played for Frank Sinatra. Then they got all the guys up in Chicago together, so I played with about 15 of the original members of Frank Sinatra’s touring band. They didn’t know what to make of me at first but after we sang the first song, they all loved it. They have been so complementary and supportive ever since.

You are well known for being a rock singer and guitarist. Did you have any trepidation as to how your fans would react to this new album?

No, I was really excited to get it out there. Before I realized this would be a great project to raise money and awareness for Down syndrome, I didn’t really think it had a place in my career, but once the stars aligned, it made sense. It would be one thing if I was just putting out a record but when you’re doing something for charity, you can pretty much do whatever you want. That’s what I think the beauty of Take a Chance for Charity is—any artistic vision you want to see through, you can do it in the name of charity and that’s a great thing.

Can you tell us more about Take a Chance for Charity?

It’s a program that asks people with a platform to do something that is unexpected of them. It can be a singer painting a painting or an actor being an athlete; something completely out of the realm of what they’re known for to raise money for charity. Right now, I have a bunch of excited folks and friends that want to be one of the next upcoming projects, so we are excited about that.

What has been the feedback of this new album from your diehard rock fans?

The feedback has been probably the best I have ever gotten for any project I’ve ever done. It’s been very exciting. I run into my friends in other bands that you would never think would be into something like this and it’s funny to see how much everybody loves Sinatra’s music.

You’ve said your daughter Stella was the inspiration for this record. What can you tell us about her and your family?

Well, my wife and I have been married for 20 years now and we have three children. Our oldest, Austen, is 17 and Pearson is 13. Then we had a big gap, and my wife said she wanted to have another child so we tried and tried and we got our little Stella, [who is 19 months old]. She is our first daughter and she has just made everybody around her better, stronger people. It seems like she’s been an anchor for everybody; not just our family but for all of our friends. Everybody rallies around her. She has given me the courage, the strength and the purpose to do this project. Everybody has asked me how nervous I was to do this project and I’ve said I wasn’t nervous at all, because if you do something for the right reasons you shouldn’t be nervous.

I understand Stella faced some big medical obstacles within her first year. What advice would you give to other families facing similar challenges?

When you have a child with special needs, you realize just how much responsibility it is and how much time it takes to make sure they see their fullest life, and I want to make sure that other families have the same opportunities that we have. Stella goes to therapies all week long—she does about five therapies a week. She had open-heart surgery at nine months and these are the things that might make someone expecting a child with Down syndrome, or any other kind of special needs, very nervous. I like to tell them that these children are very resilient, much more than we adults.

Stella quickly bounced back and was laughing two days after the surgery. Raising a child with special needs does take a lot of work and a lot of heart and soul but it’s not something people should be afraid of; it’s something people should embrace. There are so many support groups for those with any kind of special needs children. For Down syndrome, there’s a whole world of support. There’s lots of people to ask questions to, and people are more than willing to give all the resources, all the love and help that they can give—it’s like one big happy family.

When we found out that our daughter was going to be born with Down syndrome, I worried that we would have an isolated life, but you quickly realize that having a child with Down syndrome opens you up to a whole new world of loving people. You’ll never be lonely; you’ll never be out of touch with all these great, supportive and helpful people.

And you have so generously donated all proceeds from this album to help fund the National Down Syndrome Society (NDSS).

Yes, 100% goes straight to charity. We couldn’t be happier to partner up with NDSS, they do such an excellent job. And we actually recently announced some live shows that we’re going to be doing. We raised, I think, about $150,000 in two days when we did a couple shows here in Orlando a few months ago. We also have a show in London on Dec. 15 and we are partnering up with the European version of the NDSS, trying to spread the word worldwide.

With your daughter’s birth in 2021, what was life like for your family during the pandemic?

Well, it certainly had many silver linings. I would not have done this Frank Sinatra record if it were not for the pandemic. It was during that time that I really got to hunker down and focus on it. I would drive my son Pearson to Clermont, which is about 45 minutes from us, for soccer practice. He was on two soccer teams with back-to-back practices [for] about three hours long, so I would practice on the way and then during his soccer practice because parents weren’t allowed to get out of their cars. So, I would spend about four hours a day analyzing and singing Frank Sinatra songs, four to five times a week. It was a lot of hard work and a lot of fun.

Other than that, we moved, so I became a handyman and painted my house and fixed some stuff so we could move in and get prepared for the new baby. We also enjoyed a lot of family time and I recorded a record with my solo band, Tremonti. I actually wrote the title track about somebody having a baby girl during the pandemic. That record was called Marching in Time. And, I just finished recording an Alter Bridge record as well, so three records in the last year and a half.

Even from a young age I’ve always loved music. I was 11 years old when I first picked up a guitar. I was just very drawn to it. For years before that I’d hear a guitar on the radio or see it on TV and dream about playing one. I remember watching movies like Back to the Future and Crossroads and wanting to play the guitar so bad. It was just something I was really drawn to.

I’ve read that you were born and raised in Michigan then moved to Orlando at age 15 and attended Lake Highland Prep. What are your memories of that school and of that time in your life?

I went to a very big public school up in Detroit and had lots of musician friends and bands. When I moved to Florida, it felt like everything was just so different for me, at first. I felt very different from everybody else so I kept to myself a lot. I remember my first year of living in Orlando, I learned how to write songs because I had a ton of time to just sit with my guitar and write. My school, Lake Highland, was very small at the time—there were only 55 students in my graduating class. Now the school is much bigger and it has done very well. My English teacher, it was his first year when I was his student, and now he’s the head of the lower school, so it’s great to see familiar faces doing so well. It really is an excellent school; it was just that when I first moved here, it was so small and I felt that I didn’t fit in very well. But I did become comfortable after about a year.

Between Alter Bridge, Tremonti and this new Frank Sinatra record, have you ever thought about other areas of entertainment?

Right now, I’m just focused on the big band thing and seeing how far I can take it. However, one of my big life goals is to become a published author. I actually wrote a book called A Dying Machine and I’m trying to get a publishing deal. Another one of my big dreams would be to have the book turn into a TV show or movie. There’s actually an agent who read the book and loved it and said it would be great for a TV show. We haven’t had any luck yet but we’ll keep trying.

The birth of his special needs daughter helped inspire rocker Mark Tremonti to pursue his passion for Sinatra and aid a charitable cause in the process. […]