Looking for the best things to do in Cairo?

Cairo is one of the great cities of the ancient world. Home to some of the oldest pyramids and artifacts found anywhere on earth, this 10 million strong megacity is also Egypt’s largest city as well as its capital.

As a popular tourist destination for centuries, the city’s infamous pollution, noise and crime haven’t detracted from its continued place along the tourist trail.

15 Best Things to do in Cairo Egypt

Modern Cairo is full of life and vigor, and while most visitors simultaneously love and hate the city for varying reasons, there’s no doubt that vibrant Cairo must be experienced at least once in your life.

Getting to Cairo by air is relatively easy. Whether you’re flying from London or New York, or have Sharjah to Cairo tickets, with the most affordable airfares in the low season of November to March (excluding Christmas).

When people think of Egypt, the Pyramids of Giza are at the top of the list.

The largest pyramid on the Giza Plateau, as well as all of Egypt, is the Great Pyramid. Known locally as the Pyramid of Khufu (for the pharaoh it was originally built for in the early 26th century BC), its narrow passages can be explored. However, the huge exterior is what people generally marvel at.

This area on the edge of Cairo makes a great half day visit. You can get here by metro, taxi or by joining a tour. If you want to get the most out of it, a tour is strongly recommended.

Guess the riddle of The Great Sphinx

Also located at the Giza Necropolis at the entry to the Giza Plateau, stands the Great Sphinx of Giza. Seemingly guarding the giant pyramids, the lion-bodied and pharaoh-faced Sphinx is as iconic with ancient Egypt as the pyramids themselves.

Built around 2500 BC for the pharaoh Khafre (the builder of the Second Pyramid at Giza), the Sphinx is a large monolith carved from the bedrock of the plateau that served as the quarry for the pyramids and other monuments in the area. It’s thought by a few that the head of the Sphinx may have been carved first out of a natural bedrock that was previously sculpted by the wind to give it shape. The area around it was excavated afterwards to provide blocks for the pyramids.

Float along the Nile River

Cairo is a great jumping off point for a Nile River cruise. The northward flowing Nile is the longest river in Africa and is generally believed to be the longest river in the world. It meanders through 11 African countries and splits in two just north of Cairo to empty into the Mediterranean Sea.

The Nile fuels hydro dams and provides irrigation all along its route. However, Cairo has a gorgeous unspoiled river front that is perfect for a water cruise. You can choose between party boats, historical boats and overnight and all-inclusive options. Some packages also include guided tours to the Pyramids and other landlocked sites.

Get lost at the Egyptian Museum

It houses over 120,000 Egyptian artifacts, many of them pharaonic in nature. Often portrayed in books and movies, the Museum of Egyptian Antiquities in Cairo is a great place to get lost in the past.

Featuring everything from mummies and beautifully intricate gold masks, to pottery, papyri, sarcophagi and jewelry, the museum houses some of Egypt’s most prized collections. The museum was founded in 1901.

The museum is open every day from 9 am to 5 pm. Entrance tickets cost 200 EGP for adults and 100 EGP for students.

Wander through the National Museum of Egyptian Civilizations (NMEC)

The first of its kind in Egypt, the NMEC displays the history of Egypt from prehistoric times all the way to today. It’s a large museum with well over 50,000 artifacts, including the wooden Coffin of King Ramses II and the gold foiled leaf cartonage (ancient Egyptian blend consisting of linen or papyrus held together with glue) coffin of Nejim Ankh.

Collecting artifacts from all the major museums in the region and opened in 2017, its collection of Pharaoh mummies is quite extensive as well as its collection of Greco-Roman, Medieval, Islamic and contemporary.

Split into two permanent collections, you can explore both the chronological side and the thematic side.

The National Museum of Egyptian Civilizations is open every day from 9 am to 5 pm.

Entrance tickets cost 200 EGP for adults and 100 EGP for students.

The Hanging Church, more formally known as the Saint Virgin Mary’s Coptic Orthodox Church, is one of the oldest churches in Egypt. The first iteration of the church likely dates to the third century, and is also called the Suspended Church or Al-Moallaqa. It was built by edict of the Roman emperor Diocletian.

The Hanging Church isn’t actually hanging. Instead, the hanging name came about because it’s built on top of, or hanging over, the gates of an old Roman fortress.

It’s a unique structure, with a roof shaped in the supposed structure of Noah’s Ark. The altar is especially beautiful, with lotus-shaped inlaid wooden panels decorating the wall above the altar.

Entrance to the Hanging Church is free, but donations are accepted.

Enjoy the view from the Cairo Citadel

It’s a formidable and impressive defensive fortress, due to its strategic location on the Muqattam Hills.

It’s also one of the best locations to enjoy an unrestricted panoramic view of Cairo.

There’s a lot to see here, including the Muhammad Ali Mosque, built by Muhammad Ali Pasha in 1848 AD, and the Sultan al-Nasir Muhammad Mosque, which was the royal mosque during the Mamluk period. The site also contains the National Police Museum, and the National Military Museum.

Relax in the green oasis of Al Azhar Park

Al Azhar Park is a lovely, restful break from the noise and busyness of Cairo.

There’s plenty of greenery, including palm trees, with children’s play areas, fountains, a lake, and restaurants. There are even trips by golf cart inside the park.

Located by the Old City of Cairo, Al Azhar Park is an expansive 30 hectares (74 acres). The park was originally a 500-year-old dumping ground, which was transformed into a green oasis with waterfalls, citrus trees, and gardens. It opened in 2005, and cost in excess of 30 million USD.

While you’re at the park, visit nearby Al-Azhar Mosque, which is Cairo’s first mosque, commissioned in 970. Admission to the mosque is free.

Admission to Al Azhar Par is not free. Foreigner tickets are EGP 30, and EGP 35 on Sunday.

There’s so much to do and see in historic Cairo that we couldn’t stop at just the typical top 10 Cairo attractions. If you’re looking for some more bucket list items for sightseeing in Cairo, here are five more ideas.

Visiting the Cave Church is one of the most unique things to do in Cairo.

The Cave Church, or Monastery of Saint Simon the Tanner, is located in the Mokattam mountain in southeastern Cairo. To get to the Cave Church, you’ll need to go through Garbage City.

Garbage City is a poor settlement at the base of Mokattam Hill on the outskirts of Cairo. It has Cairo’s largest concentration of Zabbaleen garbage collectors, with an economy which revolves around collecting and recycling the city’s garbage.

Rubbish from greater Cairo gets collected by the Zabbaleen and taken to the Garbage City settlement. Residents then separate the garbage from the recycling. There’s garbage everywhere – the roofs, streets, and so on.

With a seating capacity of 20,000 it’s the largest church in the Middle East.

The Cave Church is free to visit.

Bring your bargaining skills to the Khan Al-Khalili Bazaar

In the heart of Islamic Cairo, the Khan Al-Khalili Bazaar is a busy and colorful open-air bazaar. You’ll find everything from spices to perfumes to souvenirs to jewelry to hanging lamps.

Credit cards are not accepted in the majority of the shops at Khan el-Khalili Bazaar, but USD and Euros are often accepted.

There’s no fee to enter the bazaar.

Shop until you drop at the Cairo Festival City Mall

This modern mall has all the requisite features you’d expect in a mall, including international chain stores, a cinema, restaurants and a food court. It also connects to IKEA.

There’s even a dancing fountain attraction.

It’s a huge, modern place, with free Wi-Fi, shopping cart rentals, and valet parking. You can even rent a power bank for your phone.

If you have kids, you’ll love the stroller rental, mommy’s room, and child identification bracelets. There’s also Magic Planet, with rides, games, and fun for the kids (and adults).

There’s no cost to visit the mall.

Al-Muizz li-Din Allah Street (known locally as Al-Muizz) is a major street in the walled city of Historic Cairo.

One of Cairo’s oldest streets, it dates back to the foundation of the original walled city in the 10th century.

Running north-to-south, the street grew in fame in part to its proximity to the popular markets in the area, like the Khan Al-Khalili Bazaar, as well as the large and beautiful buildings built along it, especially towards the northern section with its finely restored Mamluk buildings.

At just one kilometer in length within the walled city, running from gate to gate, traversing its length is an easy walk for most people.

Some of the highlights along Al-Muizz include the Madrassa of as-Salih Ayyub, built in 1247 and a fine example of Islamic architecture. Directly across from the madrassa is the beautiful Madrassa of Qalaun, considered by many as one of the Mamluk period’s greatest architectural triumphs.

Completed in 1293 by Qalaun’s son, Muhammad al-Nasir next to it has an interior filled with fine marble, mother-of-pearl mosaics, intricate tile work, and stained-glass windows. Farther north is the younger Madrassa of an-Nasr Mohammed (built in 1309) with tons of ornate detailing.

Next, you have the Egyptian Textile Museum with a wide collection that spans the Pharaonic era right up to the Islamic period. as well as the large and impressive Sultan Hassan Mosque (Mosque-Madrasa of Sultan Hassan).

Enjoy the views at the Cairo Tower

Situated on the Nile Island of Gezira is the Cairo Tower. Standing at 187m or 614ft, it is the tallest structure in Egypt and the tallest in North Africa. This free standing tower of concrete is second only to the Pyramids of Giza in popularity, and its circular observation deck and revolving restaurant at the top have some of the best views in Cairo.

Home to the district of Zamalek and the majority of Cairo’s arty boutiques and hipster restaurants, the Nile Island of Gezira that the Cairo Tower sits on is also a great place to hang out with friends and explore.

Do you have any favorite attractions in Cairo? Let us know! 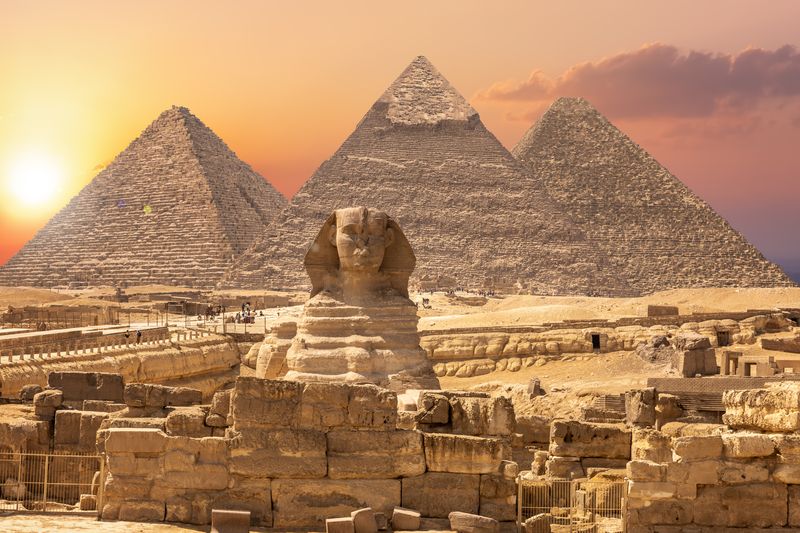