, but Parker Finn’s debut feature Smile is the only one that really means it. In this blackhearted, dementedly funny, and stupid-in-all-the-right-ways antidote to certain films stifled by stuffy metaphor, a curse-transfer premise not so far from The Ring goes all in on a savage survey of just how badly the horrifying things we witness as children mess us up for life.

Finn’s undulating, restless camera (my companion pointed out that he borrows the upside-down horizon shot from Midsommar to sow the same air of unease) opens on a woman lying dead in her bed, slides to the right past a pharmacy’s worth of pills and framed photos tacitly conveying her divorce, then finally lands on the shattered face of her young daughter. Smash cut to adulthood for psych-ward doctor Rose (Sosie Bacon), whose morning session ends with a seemingly schizophrenic patient grinning as she gives herself a Glasgow smile and slits her own throat.

Rose has contracted some manner of suicide contagion, and will soon be moved to look into the deceased’s ravings about a malevolent spirit that torments her with visions of people baring their pearly whites like beefing chimpanzees. As she conducts her investigation into the grisly phenomenon — helped by a cop ex (Kyle Gallner), impeded by her alarmed boyfriend (Jessie T. Usher) and therapist (Robin Weigert, money in the bank) — she works her way through a chain of broken souls with still-convulsive pain having sunk into their bones over a course of years.

This isn’t a revolutionary idea, but Finn follows through on it with merciless focus tempered by a sense of humour about his work and genre. He likes to let us in on the joke as he makes it; Rose walks into the inciting session to find what looks like an empty room, and though the framing of the door makes it clear that the accursed is hiding behind it, that makes the punch line of her reveal (and the knowing musical sting) all the better.

Deft formal cues give us all the information we need to enjoy the ride, particularly with regard to the copious jump scares. Generally a cheap and underhanded tactic, it’s redeemed here by Finn’s willingness to be upfront, as he alerts his audience that something’s coming by silencing the omnipresent rumbling on the soundtrack. And a viewer has no choice but to respect the game on the sole gotcha he really commits to, a well-landed jab for how it commands and holds attention.

The secondary reliance on hallucinated nightmarish fakeouts doesn’t make such a strong case for itself, and by the time someone’s immolating in a living room, the Aster influence has grown a mite overbearing. But these issues are minimised by the goodwill built up in the indelible moments: a child’s birthday party that takes a turn for the gruesome to seed another generation of mental distress; an argument between sisters that goes to more serious and vicious places than everything else has led us to expect; a handful of face-manglings for the record books. Finn has a fine-tuned sense for our reaction and response, oscillating between the disquieting and the absurd (as when Rose pours herself a bizarrely small glass of wine and downs it in a gulp as if it’s whiskey) at just the right intervals.

The ending’s bold pessimism seals the respect for and understanding of the oft-exploited theme of trauma, portrayed here as a deep, primal force as inevitable as death itself. Slipping into insanity right alongside its protagonist, Smile is an uncommonly sharp movie deviously disguising itself as more of the same. Lowering our defences with the appearance of the commonplace may be its most wicked move of all.

The trailer suggests a one-trick pony.
2

Well, that’s quite an array of tricks!
4 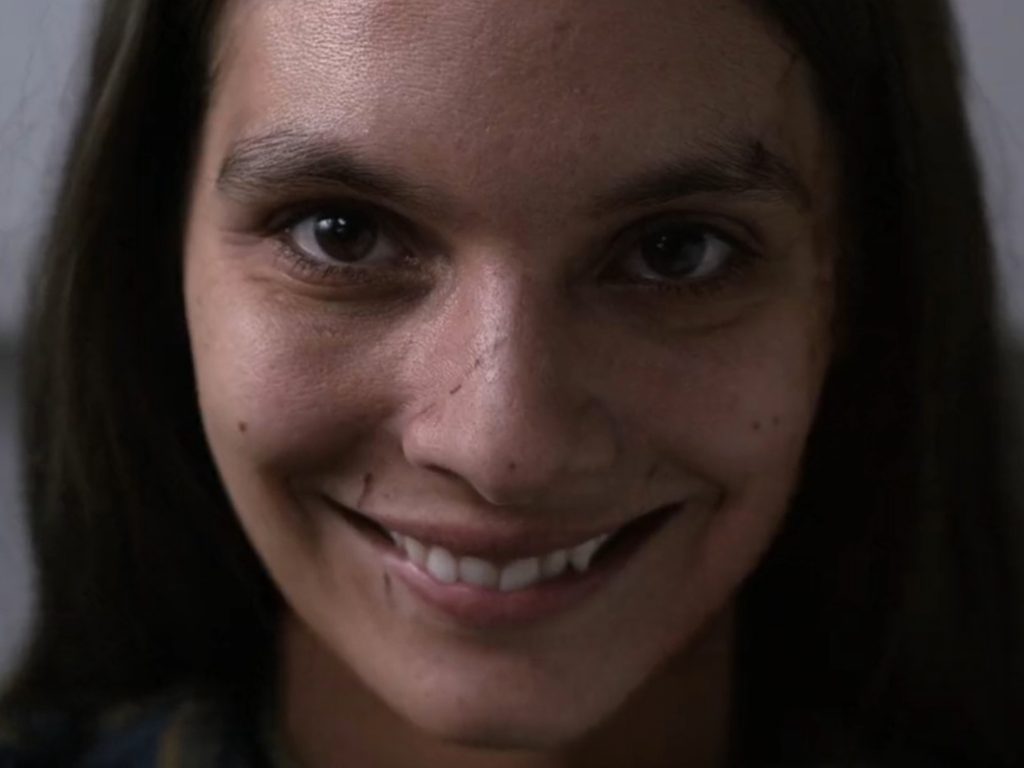