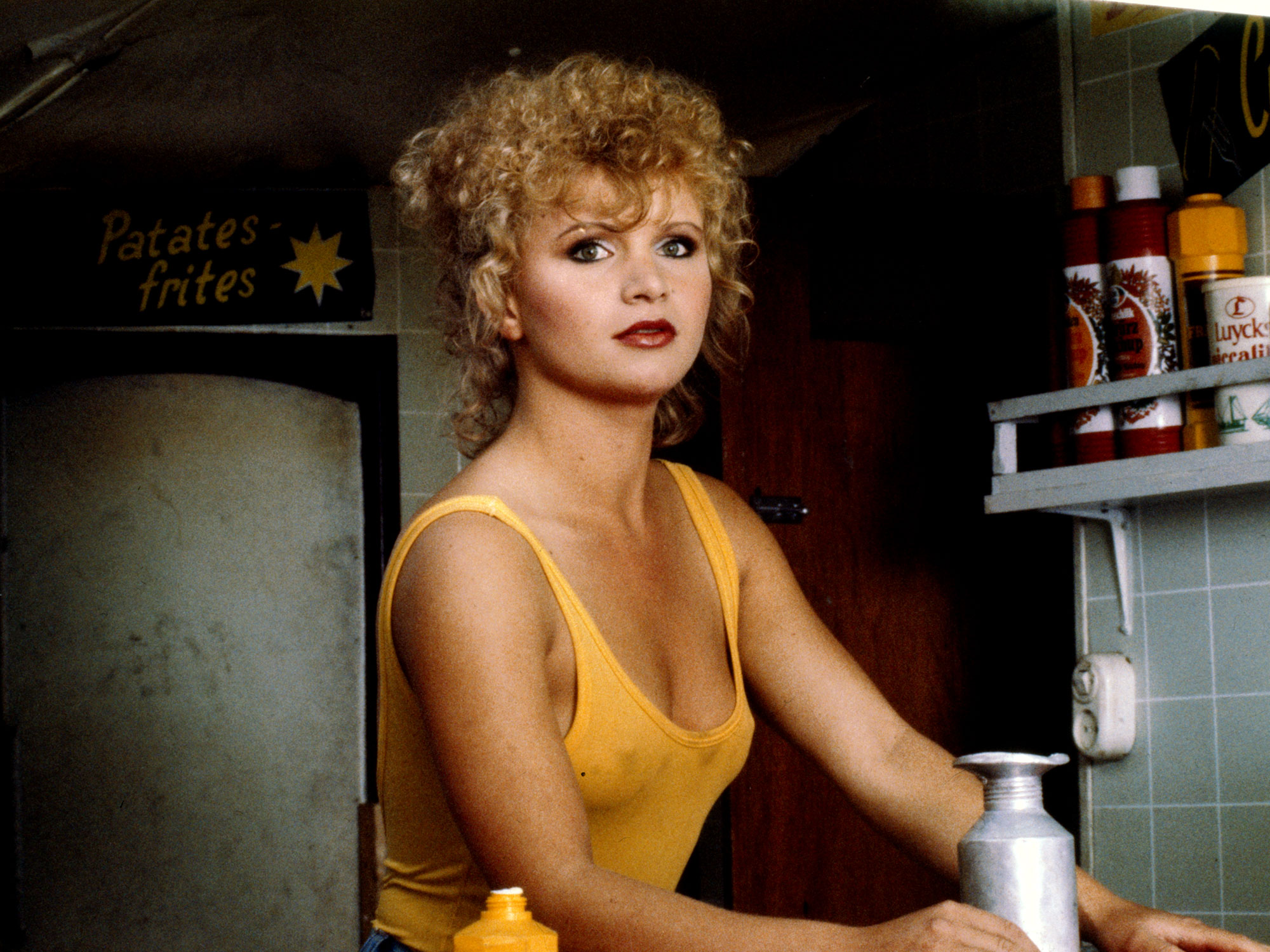 “I’ve got a good head for business,” says Fientje (Renée Soutendjik). “Never had much luck.” Fientje works with her brother Jaap (Peter Tuinman) selling fast food from a mobile stall, and they are currently using a small town outside Rotterdam as their temporary business base, where they will stay until they decide to move on. But we can tell from the way that Fientje, after first arriving in town, looks longingly through windows at a community scene in a bar and a couple next door holding up baby clothes, that she yearns for a more settled life.

Her ‘head for business’ is expressed mostly through her transactional attitude towards sex, which she gives out to a policeman to stop their caravan being moved on, and to a TV presenter (Jeroen Krabbé) in exchange for a favour. The worldly Fientje knows how to use her assets to secure a deal. The problem, as she says, is her bad luck, tying her to a life on the road.

Fientje finds different kinds of hope in three young local men who all – conversely – dream of escaping their provincial milieu. Rien (Hans von Tongeren, who committed suicide not long after making the film) is an up-and-coming motocross champion whose dad runs the local bar. Hans (Maarten Spanjer) has similar aspirations, but is a much less talented rider, while Eef (Toon Agterberg), who serves as their engineer when he is not running his garage and petrol station, wants to move to Canada to get away from his violently religious father.

These working-class motorheads ooze braggadocio and machismo, constantly boasting of their sexual prowess and even trying to settle their rivalry for Fientje with a literal dick-measuring competition. But deep down they are big softies, with each of their girlfriends complaining of how “limp” they.

Paul Verhoeven’s fifth feature is a coming-of-age story that plays like Holland’s answer to Grease, made two years earlier. After all, here too we have young men trying to prove their masculinity and worth through vehicular racing. When Eef takes to the dance floor in an early scene, the DJ announces, “Wow, here’s the new Dutch John Travolta!”, alluding to the dancing star of Grease (and of Saturday Night Fever) whom Eef resembles (there are also posters of Travolta in Fientje’s caravan). 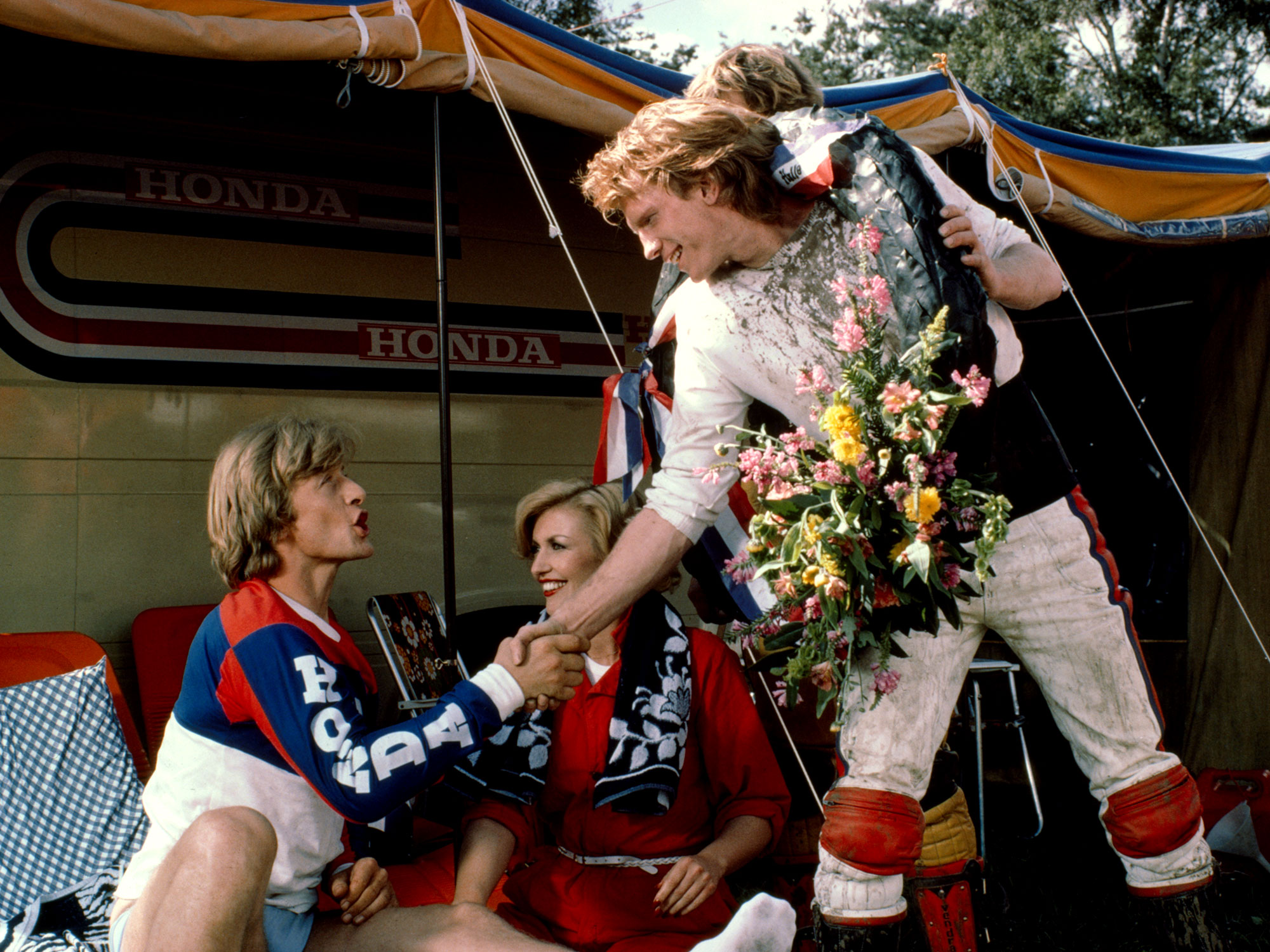 Even the film’s title alludes to Grease: ‘spetters’ is not only a Dutch colloquialism for ‘lookers’ or ‘hunks’, but also a literal term for the ‘splatters’ (of mud, engine grease and chip oil) that mark the lives of these three men and Fientje. The big differences are that this is not a musical (although its score does showcase a lot of early ’80s hits from the likes of Blondie, Iggy Pop and Michael Jackson), and that its female outsider figure Fientje is, unlike Olivia Newton-John’s Sandy in Grease, no virgin. On the contrary, Fientje’s sexual experience and liberal forwardness sit in contrast with the relative immaturity of her three suitors.

These men’s rites of passage are written in failure, impotence and bad luck, whether Hans’ constant trouble starting or properly riding a bike, or Rien’s crippling road accident (in which he is paralysed from being struck hard precisely in the crotch), or gay-bashing, tough-guy Eef’s discovery, while being gang-raped, of his own deeply repressed homosexuality following repeated failures to get hard with women.

Significantly, the three friends’ growth into men is set against locations that also reflect transformation and renewal: a building site, a train station under construction, and am old-fashioned pub that will eventually get the ‘modernising’ that Fientje observes its needs. For in these young men’s stories, as they become caught up in a collision of older and newer values, you can also the painful emergence of the Dutch nation from its own Calvinist, homophobic, colonialist past.

It’s ironic, then, that Spetters was dismissed for its offensive vulgarity, first by the Dutch movie foundation, who rejected the first script Verhoeven showed them and only gave him funding when he offered them a watered down revision (he still shot the first script), and then by the Dutch Christian groups, the police and the press, variously protesting the film’s supposed misogyny, homophobia, anti-religious and anti-disability positions, and its general amorality – even though Spetters itself is engaged in a multilateral dialectic on these issues.

It was certainly a sexually explicit film for its time, with both male and female nudity and occasional flashes of hardcore material, but none of this appears to have negatively affected its domestic box-office performance in the Netherlands, where it had over 1.25 million admissions.

So Verhoeven, too, had a good head for business, if maybe not the best luck. The film’s poor critical reception, and the bad reputation it brought to the director, would eventually lead Verhoeven to leave his home for Hollywood, and for his own new beginning – although the sexual content in Spetters would also dissuade Stephen Spielberg from recommending Verhoeven to George Lucas as a potential director of Return of the Jedi.

Still, the Star Wars saga’s loss may well have turned out to be science-fiction cinema’s win, as Verhoeven went on to make RoboCop, Total Recall and, best of all, Starship Troopers – all of which are a million miles from this parochial Dutch drama.

Spetters is released on a limited-edition two-disc Blu-ray set by BFI, remastered in 4K and presented in High Definition, on 2 December.

The 1980 coming-of-ager Spetters is one of the Dutch master’s most uncompromising and controversial works.
The post Revisiting Paul Verhoeven’s sexually explicit answer to Grease appeared first on Little White Lies. […]