The State Funeral of Her Majesty Queen Elizabeth II screened at 130 Vue and Curzon cinemas across the UK, categorised as a 300-minute documentary. The posthumous intersection of QE2 with my most beloved artform felt like an opportunity to parse meaning out of an institution, The Royal Family, that makes me feel like an outsider in my own country.

In a turn of events that journeymen documentarians can only dream of, by the time I tried to book a seat, they were all sold out, bar two disabled spots at Curzon Knutsford. So I streamed the documentary from home in what would rank among the spookiest viewing experiences of my life. More frightening than The Blair Witch Project.

The major questions I had going in were: Will we learn anything about Elizabeth Windsor? Are public eulogies ever honest? Who will wear the best hat?

Strange and loaded images set the scene as young soldiers hoofed the coffin bearing the mortal remains of Her Majesty onto their shoulders. One grimaced – with emotion? Or with effort? In Kenneth Lonergan’s Manchester by the Sea, a scene of a body being taken into an ambulance is turned into a tragic farce as paramedics struggle to push the stretcher inside the ambulance. Were these nameless extras haunted by the lifelong notoriety that would follow if they dropped Her Maj?

The mood was eerie as the parade bearers joined a crisply choreographed unit of natty-looking Naval officers, while the remnants of the Royal family kept up the rear. Central London was empty save for this grave procession. Surely this was a historical re-enactment, but no, this was a real-time event in a city otherwise shut down. A reboot of 28 Days Later where zombies wear military uniforms and march in formation.

Soaring visual highs were achieved as the funeral parade moved to Westminster Abbey where roving cameras captured every nook and cranny of this 1062-year-old Gothic church. An aerial camera shot the congregation from above, before slowly pushing down into the scene. Hat-tip to the playful editor who traded on fade transitions to create montages of the space. No lighting tricks were needed as sunlight streamed in through the stained glass windows, elevating the spectre of mortality, as beauty always does.

The speeches began with Patricia Scotland QC offering an early entry into the ‘impressive hats’ column with a sensationally large bow and a brim that almost covered her eyes. She was followed by our new Prime Minister, Liz Truss, wearing a sort of fascinator that my colleague, Hannah Strong, described as “Sad. Draped like a bit of ham on melon.”

Jesus Christ was quickly established as the guest of honour – receiving more name checks than the dear departed –and only became more dominant as an interchangeable medley of Bishops, Deans and Reverends, used the occasion to mount a Christianity broadside. Frequent cut-aways to the coffin planted the question of what she would have made of this, while frequent cut-aways to her mute family underlined the fact that they are simply the most important room meat, even in grief, dutifully carrying off roles in place since Henry VIII decided that the monarch would also be the Supreme Governor of the Church of England.

There was a brief spike in interest as the camera moved outside the Abbey where mourners from the general public grieved behind metal fences lined by police officers. This image evoked the paradox of being a member of the public obsessed with the royals. You are encouraged to feel with them, just don’t come too close.

The MVPs, the young soldiers, once again hefted the coffin up onto their shoulders, before sliding it onto a 123-year-old gun carriage to be the rolling centrepiece of a sombre match from Westminster Abbey to Hyde Park’s Wellington Arch. The coffin was dressed to the nines, draped in a Sovereign flag, and topped off with a crown, orb and sceptre. One must wonder, was there some kind of adhesive in place to stop them sliding off?

Oh the march, how it lasted. There were flashes of spectacle value to the colourful mosaic created by naval officers in blue, beefeaters in red, and the most austere brass band in the world, all led by the Canadian mounted police, with representatives present from all Commonwealth countries (we still have those!). While the repetition of the same grand wide shots were used to diminishing returns, there was a hypnotic quality to the combination of monotony and grandeur, like watching someone shuffle a deck of gold-leaf cards for all eternity. 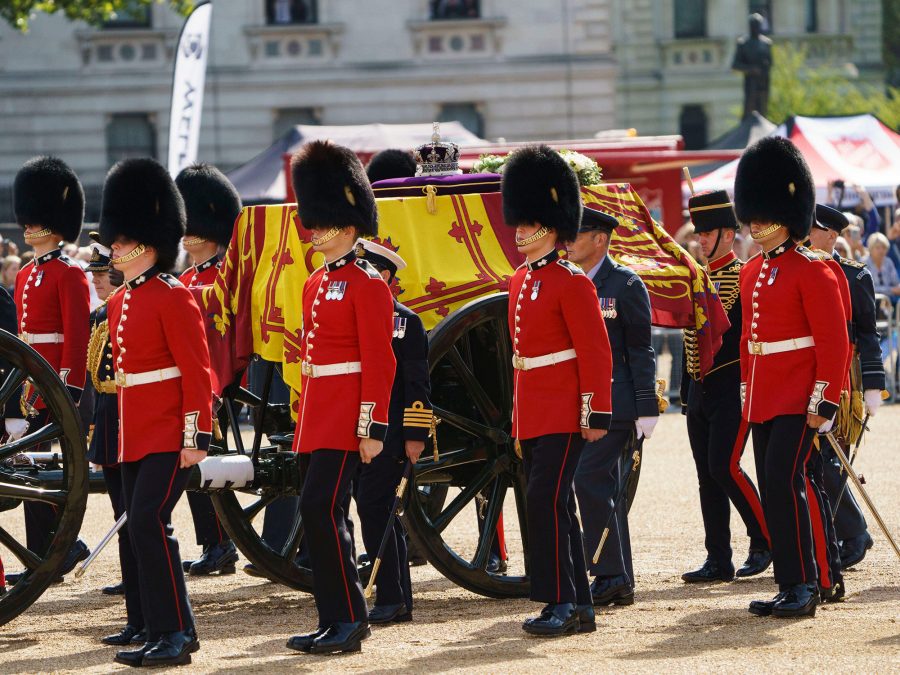 Verite focus on events of the day ensured that notable controversies from her reign – the colonialism and imperial pillaging – were absent from the purview of the coverage. This was, perhaps, inevitable, yet more palpably unpleasant was the emptiness to almost all the tributes from pundits who tore apart every cosmetic detail while avoiding saying anything of substance. Madness was descending, like the fog in The Fog.

A teeny glimpse of personality arose thanks to a few mavericks intent on speaking about our ex-Queen in non-bland terms. An old military friend spoke vividly about her lifelong love of horses and ponies, while Maureen Lipman recalled “a modest and shy person in the skin of someone in charge of everything”. Even the unsurprising fact of King Charles looking devastated felt thrillingly subversive, with his natural emotion acting as a flare above a sea of rictus faces.

After Hyde Park, the coffin was transferred to a hearse driven in a motorcade to Windsor, whereupon there was another round of somber marching. By now, I was feverish. The commentator revealed that the march down the aptly-named Long Walk would last another hour before they reached Windsor Castle. I told myself I could duck out for a cleansing bath, muttering “they will still be marching on my return”. And they were.

Things took a turn for the creepy at the ceremony at St George’s Chapel, as men passed around the orb and spectre and a voice spoke of “the orb… the globe of the world…” and “the most noble order of the garter”. This archaic ceremonial atmosphere was calling to mind the devilry of The Omen and Suspiria. I became afear’d that in watching this I had been brainwashed and would march into the night to offer myself as a human sacrifice to a local fief.

The filmmakers were complicit in the ill effects I was experiencing from this documentary beamed out to billions. Why was there no rigour to the framing? QE2 ruled our country for 70 years and here is an a-historical, a-social void where journalists didn’t provide context, but instead floral offerings with their words. I began to have the queasy feeling that I was watching state propaganda of the most insidious kind. By 5pm I did not feel like I had watched cinema, more like what Alex is forced to endure as a form of mental rehabilitation at the end of A Clockwork Orange.

It took a day of Royal detoxing but I managed to parse some meaning out of the institution that makes me feel like an outsider in my own country. Even now, writing this, my mind is at war with itself. I feel like a treasonous, insensitive monster. Never mind that she lived comfortably until the grand old age of 96 and we all have to go sometimes. Never mind that a state funeral is not a normal funeral.

There is something in the water here that makes people feel like saying the wrong thing at the wrong time is such a grave offence that freedom of expression is simply not worth the risk. It is an ambient form of oppression. No one has to explicitly threaten us with hanging, like in days of yore, because we will police ourselves and each other, stifling rational observation by making people deeply ashamed of impropriety.

This thing in the water has caused untold harm. I feel nothing less than dread when I experience it in a look, or a tone, or a 300-minute funeral documentary where the deceased is overshadowed by all the agencies prostrating themselves on her grave.

The post Reckoning with the ghoulish visual spectacle of the Queen’s funeral appeared first on Little White Lies.

Sophie Monks Kaufman reflects on the cinematic elements and pomp and circumstance surrounding the funeral of Queen Elizabeth II.
The post Reckoning with the ghoulish visual spectacle of the Queen’s funeral appeared first on Little White Lies. […] 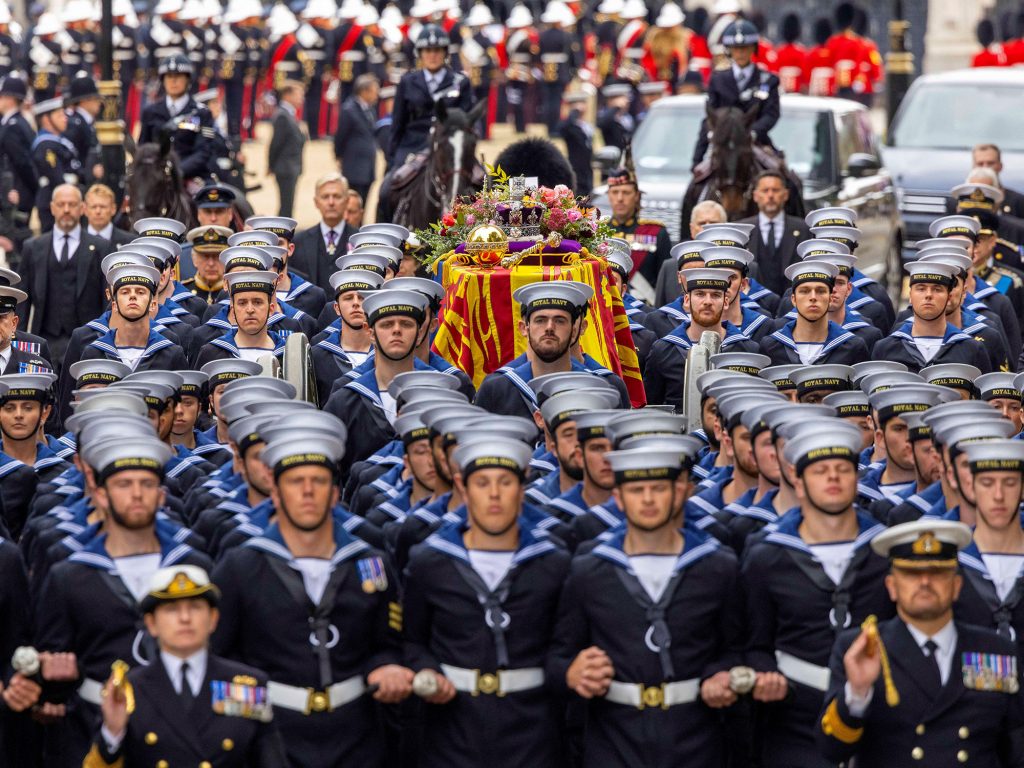