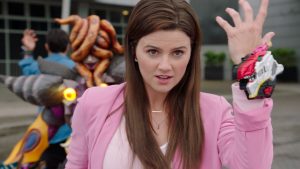 It’s a Saturday evening in Orlando in March and one of the Power Rangers is checking in from the future via Zoom. OK, so it’s actually Hunter Deno, who only plays a Power Ranger on TV, and she’s not really from the future, but it is already Sunday morning where she is on the other side of the globe.

Since September, the Windermere native has been living in New Zealand while filming Power Rangers Dino Fury, the latest installment of the iconic children’s show, which premiered on Nickelodeon in February. Deno plays Amelia Jones, aka the Pink Dino Fury Ranger, and this represents the big break for the 25-year-old actress, who made her show business debut when she booked a commercial on her first birthday.

Born Ashley Hunter Denoyelles, she is a product of the Orange County Public Schools system and graduated from West Orange High School. She was a normal Central Florida kid who participated in sports and loved roller coasters, but at the same time she was busy filming commercials throughout her childhood and eyeing a career in the arts.

After modeling for a few years starting at age 16, Deno longed to transition into television and film and spent time in Atlanta before moving to Los Angeles two years ago. She landed the role of Amelia last summer and it has been a whirlwind ever since, as she picked up and left for New Zealand within a month, built close friendships with her new castmates and connected with fans who were drawn immediately to her fun-loving character.

Deno spoke with us about her time in the spotlight so far, enjoying life in a country where COVID-19 is not an issue and why Central Florida will always hold a special place in her heart.

You are now part of a pop culture phenomenon that most people are familiar with. So what’s it like to be a Power Ranger?
It’s crazy and so surreal. It’s something that hasn’t even fully clicked yet. I’ve known since Aug. 13 of last year and we’ve been here since the middle of September and started filming in the middle of October, and it’s something I’m still getting used to. … Five years ago if you had asked me I would have said, “No. Why would I be a Power Ranger in five years?” Who would have known that I would get this opportunity? It’s something I’m still getting used to and it’s pretty great.

How would you describe your character, Amelia, who starts off as a reporter who is fascinated with the paranormal?
She’s definitely career-driven but also she’s so optimistic and she always believes in the good in everyone in every situation. She wants the best outcome to happen and she has a lot of hope. … She has this crazy obsession with the paranormal and later on you’ll see why. She just wants answers and she’s been searching for answers her entire life. I think being a journalist, she tries to combine [her passion and her work] so that way she can do her job while still searching for something she truly wants to unravel.

Does your athletic background play into the physical things you’re doing on the show?
I grew up cheering and I grew up playing volleyball, and then I always did kickboxing and Jiujitsu so I would know how to defend myself but also to stay active. My boyfriend is a stunt performer so we did a couple fight scenes together and he trained me a little bit. So when I got the audition I thought it was perfect because I had been training and I was happy I could actually put the skill to use. It was cool to send all of my videos and hard work and training in and actually put it to use. 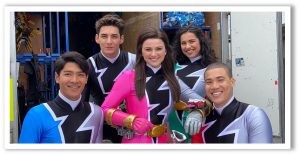 Although this is your big break in acting, you certainly have been on this path for some time. I know you actually booked a commercial on your first birthday.
That’s right. I grew up doing small commercials and everything. I’ve been working toward this in the big picture and I’m stoked that this is my breakout role, for sure.

Why do you think you were drawn to performing from a young age?
I think it was something my mom put me in when I was young and she said in elementary school I was working so much that I would wake up and say, “Mommy, am I going to work today?” It’s just something I fell into, I guess, but I couldn’t imagine doing anything else. I think about if this wasn’t my path or if this wasn’t my passion, what would I do, and it would still have to be something in the industry, whether it was working in an agency or as a manager or someone behind the camera. I think this type of industry was something I would have fallen into regardless of whether I had started so young or not.

While you were doing commercials as a kid, were you also acting in school plays and things like that?
Actually, I did one play, The Lion King, when I was little and then in middle school our high school did Alice in Wonderland and allowed the middle school students to play smaller roles. Besides that, I didn’t really do theater. I just did commercials growing up and when I turned 16 I wanted to try modeling, so I modeled for a few years. Then I was an extra on a movie and I realized TV and film is what I wanted to do. I still do model but my main focus is TV and film.

Was there any experience that confirmed you were on the right path?
I think the one job where I was an extra confirmed it. It was Insurgent and I watched Shailene Woodley do a scene where she bawled her eyes out. She made me feel so much emotion just watching her so that really set the tone for me in the sense of, I want to make people feel the way she made me feel when they’re watching me act. I want to be an actor who shows so much emotion and someone feels something from the project I’m on.

Going back to your childhood, did you always live in Florida?
Yep, born and raised. I love Florida. It’s somewhere I can see myself down the road, raising a family there. My brother’s there, my parents are still there, all of my friends.

Do you get to visit often?
When I get back [from New Zealand] I’ll probably stay for a few months at home. I go back and forth all the time. My family is in Florida and my boyfriend is in Georgia and I’m in LA, so I’m bi-coastal as much as I can be. Family is very important to me so I definitely make it a point to go home as often as I’m able to.

Do you still connect with people from West Orange? Have people from high school seen you on the show and reached out?
I don’t really keep in touch with anybody from high school. I have talked to a couple of people but I never really hang out with anyone. I had someone reach out from my elementary school who I hadn’t even thought about for so long. I was like, “Oh my gosh, you were one of my best friends in elementary school. This is so cool.”

I understand that you’re involved with a local charity that means a lot to you. What can you tell us about that?
It’s an organization called Give Kids The World and they work with the Make-A-Wish Foundation. It’s mostly for kids but really anyone who is very ill and wants to go to Disney or Universal. It’s this whole village where they have houses—not apartments or hotel rooms but full-on houses—and they provide transportation and anything you want. Within that village they have a café that’s open all the time and whenever you’re hungry you can get whatever food you want, free of cost. They have a carousel you can ride on; they have other rides. They have weekly parties and they have a weekly Christmas [celebration] because you never know if it’s going to be that child’s last Christmas. They have weekly birthday parties and other things. I’ve gone a few times and helped kids ride a horse or helped them onto the carousel or helped them through the lunch line. I’m really excited to get back and I’m hoping that whenever I get my own Power Rangers suit I can go and make their day a little better. I always liked going and helping for their benefit and if I can make it that much better, I would love that.

Is it true that another hobby of yours is baking and you love to bake treats for the cast and crew?
[Laughs] Yes, I’ve always loved baking and cooking. When I got here, it was my first time really living on my own, especially in a new country. There was absolutely no one I knew, no family or friends, and I was in such a different time zone. So I started making cookies because I wanted some cookies, but I made so much so I took them in to set one day and they all enjoyed them. It started becoming a weekly thing that I would make different types of cookies or different types of muffins. It keeps me occupied and lets me have my own “me” time when I need it, and it also distracts me so I don’t miss home too much.

Hopefully, Power Rangers will last for some time, but what are your future goals for TV and film?
I don’t know. I’ll just be thankful for anything. I’ve had a few auditions recently and it makes me excited to think about what’s next. It makes me a little anxious, too, just because you never know. I definitely see myself more in TV than film but any opportunity I’m given, I’ll be grateful for. I don’t have a specific way to go but I’m excited to see what happens.

Amelia has a funny side to her. Would you be interested in a sitcom or something of that nature?
[Laughs] It’s funny, I never grew up thinking I could do comedy, but then this show comes around and it’s very comedic. The first time my mom watched it she said, “You can pull off the little comedy beats.” I also would absolutely love something mythical, something witchy or with vampires or werewolves. Even another superhero [project]. I absolutely love mythical things like that so I would die if that happened.

Who is on your wish list as far as other actors or directors you would like to work with?
I don’t know, there are so many. I would definitely love to go the DC or Marvel route. I think a franchise like that after this would be incredible.

Finally, you said you plan on spending e xtended time back home in Florida when shooting wraps. What are you most looking forward to doing when you get back?
Besides seeing my family and friends, because I feel like that’s a given, I miss my dogs. I actually have a donkey and 30-something cows so I miss my cows too. I can’t wait to see my animals and get back into a routine of being in America, which is going to be different. I’m going to be so jet lagged when I get back, I’m going to be a zombie.

Windermere native Hunter Deno has traveled quite a distance to make her television starring debut playing a well-known children’s hero. […]