Kabooki Sushi earns every bit of its reputation with well-executed dishes that showcase culinary creativity.

The high-end, highly touted Kabooki Sushi now sits at two convenient corners of Central Florida. About six years ago at age 22, Chef Henry Moso opened Kabooki’s first location in a plaza off of East Colonial Drive and, then, in May of last year, the restaurant expanded to Dr. Phillips. My friend and I spent a Sunday at Disney, so we decided to visit the Dr. Phillips location that evening since its closer to many of Orlando’s attractions.

Behind the Kabooki’s walls lies an ambience of dim lighting and chic design. The overall restaurant fits about 80 people in the main dining area, so small enough to feel pretty intimate; perfect for any date night. The hostess sat us in a corner booth, far away from the kitchen and noisy chatter. 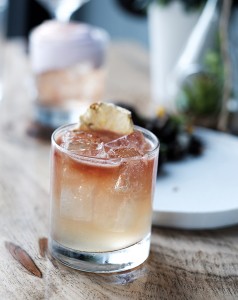 When selecting from a pretty extensive drink menu, we sought assistance from our waiter who recommended the Jungle Rock ($13) for me as I like anything sweet. Ingredients for this cocktail include Banhez Mezcal, Heirloom Pineapple Amaro liqueur, spiced banana syrup, lime ginger beer and Angostura bitters, and it was garnished with an edible dried pineapple wedge. While it was a bit more spicy than sweet for my liking, I still enjoyed this bubbly drink and its lightly smoky taste.

For my friend, the waiter suggested the Spirited To Me ($13), which had unique characteristics that I have rarely encountered when it comes to cocktails. Served with dragon fruit floral foam on top, this cocktail is a mix of Novo Fogo Barrel Aged Cachaça, Lillet Rose and Carpano Bianco vermouth. My friend could not get enough of this pink, fragrant cocktail.

For starters, we ordered the Maguro Truffle ($21). Listed under “Cold Tastings” portion of the menu, this small plate consisted of tuna with bubu arare (baked rice crackers) and shiitake crema, and it was topped with a balsamic truffle soy sauce and serrano pepper. By far, this was my favorite dish of the evening. Not only was the presentation killer with bursting colors of red, orange and green, it also had a nice twist of sweet and tangy flavor that left me wanting more than the just five pieces that came on the platter. 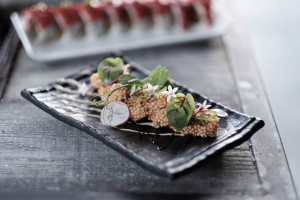 Next, we chose the One Up ($14) from the menu’s “Hot Tastings” list. The composed dish was a serving of butter roasted mushrooms, sunchoke purée, cured yolk and togarashi panko, all mixed together in a large bowl. I absolutely love mushrooms but felt this particular offering lacked a certain something and it’s not something I would readily order again.

In the “Greens” category of the menu, we went for one of the more traditional Japanese appetizers, Edamame and customized it with garlic togarashi pepper ($5). My friend and I both love spicy foods and we found this dish was infused with the just right blend of zest.

Now, on to the sushi rolls. If you’re looking to wow your taste buds, I highly recommend the Hawaii X.O ($15)—a roll of yellowtail, avocado, tobanjian aioli and shallots that is topped with hirame (a type of white fish), lemon confit, kaiware (sprouts) and pink salt. I’ve never tried lemon with my sushi, so I was a little hesitant at first, but this dish blew me away. I cannot rave enough on the piquancy and smooth finish. I would come back solely for this roll and the previously mentioned Mango Truffle alone. 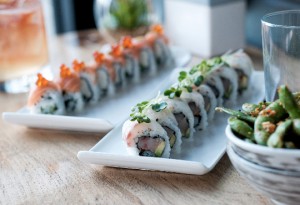 We ultimately decided on two other rolls as their descriptions were so enticing. First, there was the Double Tekka ($21), which is filled with spicy tuna, takuwan (pickled radish) and topped with akami (a specific cut of tuna), house-infused tamari sauce and a kick of kazami wasabi. Next up, was the Ora King ($18), which had lump crap, yuzu tartar, asparagus finished with ora king salmon and house-cured ikura (caviar). Unfortunately, our server informed us that the restaurant was out of the salmon so we were instead served pollock and it was explained to us that we would most likely not notice the difference. He was right and we found both rolls to be wonderfully executed.

Somehow, we saved room for dessert—and it did not disappoint. Being a chocolate lover, the obvious choice was Booki Bomb ($10), a beautiful combination of chocolate sesame soil, devil’s food cake, whipped yuzu crème fraîche, chocolate ganache and red miso caramel along with chocolate miso sorbet. The sorbet was my favorite part and even though some could consider this chocolate overkill, the smooth rich taste was better than expected.

In a showmanship of seafood and Japanese-inspired cuisines, Kabooki Sushi has definitely made a name for itself here in Central Florida. For sushi and other playful bites, Kabooki delivers a culinary performance that demands an encore.

Kabooki Sushi earns every bit of its reputation with well-executed dishes that showcase culinary creativity. The high-end, highly touted Kabooki Sushi now sits at two convenient corners of Central Florida. About six years ago at age 22, Chef Henry Moso opened Kabooki’s first location in a plaza off of East Colonial Drive and, then, in [… […]