Japan’s Genpei War of the 1180s was so consequential that even 300 years later, the Heike clan (the losing side, all but vanquished) was a popular subject for the likes of biwa players and practitioners of the then-novel noh theater. The idea was that by telling stories of the Heike, their restless spirits could be placated. Against this backdrop of flourishing performance arts during the Muromachi period, Hideo Furukawa set his 2017 novel Inu-Oh.

The book imagines a life story for title character; he was a noh actor famed during that time, but now few details are known about him. Now anime director Masaaki Yuasa has added his own unmistakable signature in adapting the book to the big screen. Inu-Oh combines history, tradition, fantasy, and rock into one dizzyingly fun tale of the joys and heartbreaks that come with expressive collaboration.

Thanks to a deal his father strikes with a demon, Inu-Oh (voiced by Avu-chan, frontperson for the “fashion punk” band Queen Bee) has an appearance that frightens most people. Most people, but not Tomona (Mirai Moriyama), a blind biwa player. The two form an act – Tomona on his biwa, Inu-Oh dancing, both singing – that quickly becomes popular. They ignore the accepted canon of Heike songs, and in doing so help many Heike ghosts pass on the to the next world. And with each big performance, Inu-Oh’s body undergoes a transformation to become more “normal.” But the duo’s defiance of the proscribed rules for biwa and noh exhibition puts them in the crosshairs of the authorities, and tragedy looms.

Multiple overlapping themes are in play. We see how expressing the truth through art can facilitate social healing – though also, as another musical duo from the unjustly scorned Ishtar sang, “Telling the truth can be a dangerous business.” Inu-Oh’s metamorphosis literalizes how fame can facilitate the public acceptance of even the most outré individuals, and how such acceptance can also sand down the rough edges that make people more unique in the first place. Inu-Oh and Tomona are both disabled and fluid in their gender presentation, offering myriad readings on the intersection of queerness and non-normative bodies, celebrating their difference and solidarity among outcasts.

Yuasa’s animation is characterized by a love of exaggerated movement, but here he downplays that tendency in favor of more grounded character designs and gestures, with a few stylistic flourishes like Inu-Oh’s ten-foot-long arm. The film constructs an elaborate sense of magical realism, rendering Inu-Oh and Tomona’s performances in intricate detail while also imagining them in thrillingly anachronistic terms.

Composer Yoshihide Otomo combines traditional Japanese music with different forms of contemporary rock to conjure the songs, and the animators similarly convey these sequences as riotous concerts, drawing inspiration from Hendrix, The Beatles, Michael Jackson, and so much more. Inu-Oh plays out as if it is a modern version of a song by an itinerant musician, relating a blend of history and folklore to us in terms we can understand.

One of the world’s best animators is at it again.
5

An exhilarating mix of age-old storytelling tradition and contemporary flash.
4 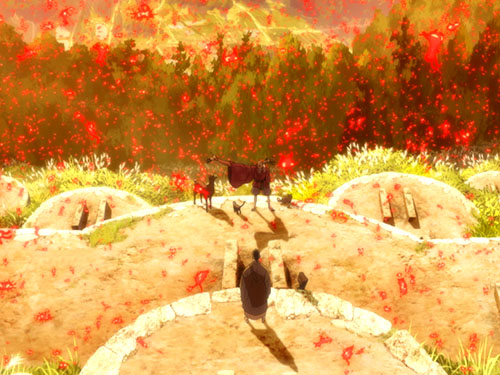