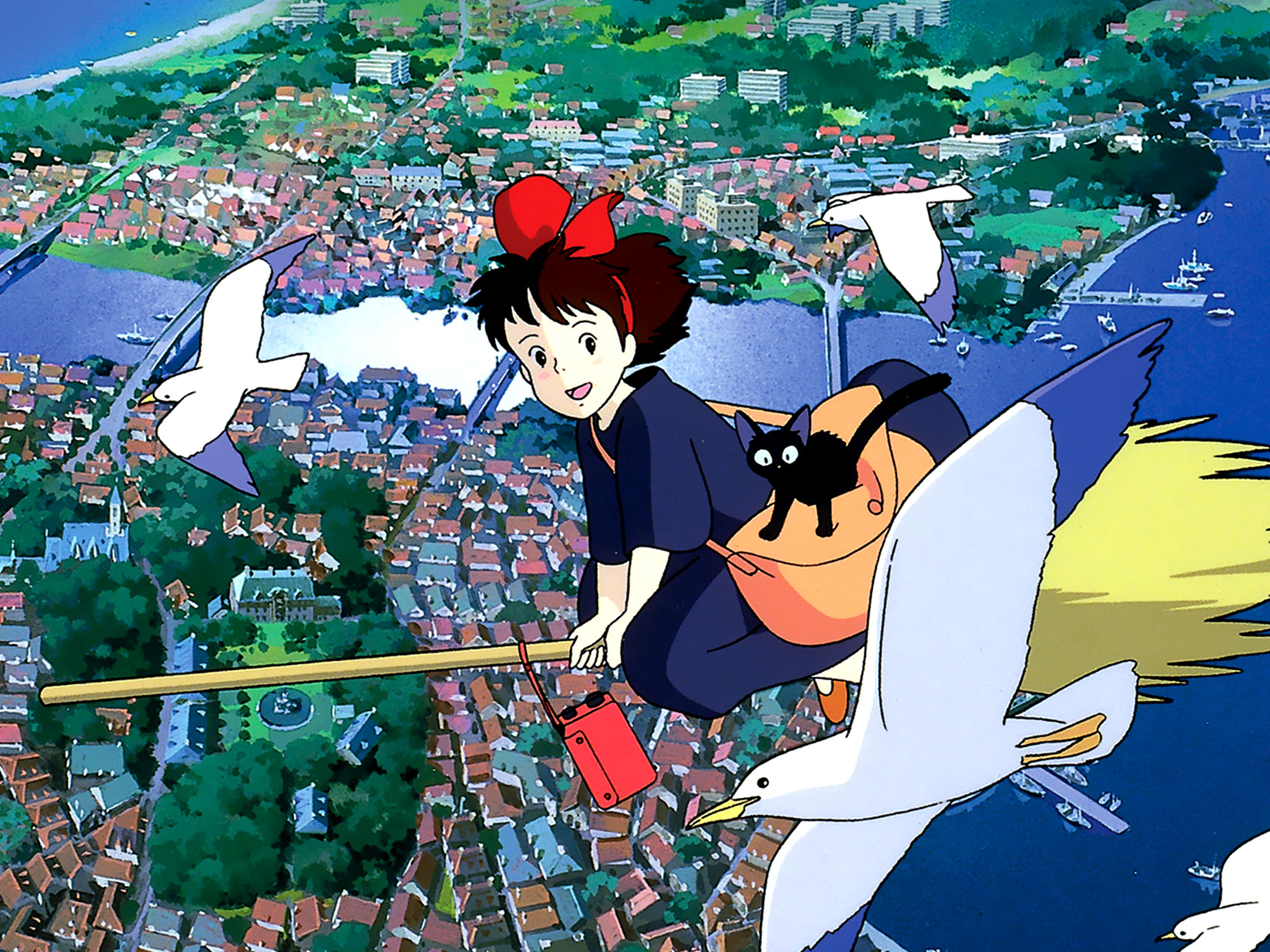 After leaving school, the necessity to create hand-drawn maps became sadly irregular, as to me, a personally scrawled Ordnance Survey could collapse the roads between my house, my friends and our favourite haunts. Even if it was a make-believe town, this crayon cartography pin-dropped imagined adventure and excitement just down the road, although in reality it was a nagged car ride away.

The attainable fantastic is so often the key to making a kidsâ€™ adventure film fly with audiences, and Studio Ghibliâ€™s Kikiâ€™s Delivery Service, which celebrates its 30th anniversary this year, soars among the best of them. But before the studio could take off, they needed to plan their route. They needed a map.

In his book â€˜Mixing Work With Pleasureâ€™, Ghibli super producer Toshio Suzuki says that â€œbeing able to draw a map is one of the basic skills one has to learn in life,â€� something he was tasked with doing for Korico City, the coastal town thatâ€™s home to an extraordinary young witch and her burgeoning courier business. â€œIt is one of the most important jobs of a producer to create maps,â€� continues Suzuki, â€œwhether based on real or imaginary worlds.â€� But his work on the film didnâ€™t just map out Korico City â€“ it set a blueprint for the studio itself.

Prior to the release of Kikiâ€™s Delivery Service, Studio Ghibli had released three feature films: Castle in the Sky, Grave of the Fireflies and My Neighbour Totoro, the latter two arriving in cinemas in 1988 as a double bill (surely Fireflies has to go first?) and a double flop. Sunao Katabuchi, maker of the 2016 anime In This Corner of the World, was initially in the directorâ€™s chair for their next one, Kikiâ€™s Delivery Service, but just a year before release, Miyazaki announced he would be taking control of the metaphorical broom handle (something he did again with Howlâ€™s Moving Castle and future Mirai director Mamoru Hosoda).

While Totoro has its undeniable charms and merchandise licensing perks, Ghibliâ€™s fourth film, about a teenage witch seeking adventure and independence, became a handbook for Japanese animationâ€™s elder statesman. In his directorial statement, assessing the filmâ€™s thematic values, Miyazaki said that the, â€œtrue independence girls must now confront involves the far more difficult task of discovering their own talents,â€� a notion he has explored throughout his career.

That quote could also be applied to the wolf warrior San in Princess Mononoke, the bath house battler Chihiro in Spirited Away and Sophie, wizard wrangler of Howlâ€™s Moving Castle. Miyazaki student Hiromasa Yonebayashiâ€™s films Arrietty, When Marnie Was There and Mary and the Witchâ€™s Flower (made with Studio Ponoc) share this same narrative DNA, and their strength is perhaps in part thanks to Kikiâ€™s stabilisation of the studio.

It was Suzuki who pivoted the studioâ€™s marketing towards young women, the idea being that they might see themselves in the entrepreneurial, free-spirited Kiki. It paid off: Kikiâ€™s Delivery Service became the third highest grossing film of the year in Japan, behind Rain Man and Indiana Jones and the Last Crusade.

Building on the strong thematic and visual identities of My Neighbour Totoro and Castle in the Sky, Kikiâ€™s Delivery Service achieved huge success, which may have helped Ghibliâ€™s earlier films to then find an audience. ensuring the studioâ€™s legacy through the cultural adoption of images and ideas that would become its defining hallmarks. Crisp blue skies, rolling green hills to lay back on, finding oneâ€™s place in the world, the importance of hard work, finding adversity in personal challenges rather than those imposed by an antagonist.

There is one moment in the film which captures the ethos of Miyazakiâ€™s work better than any other: Kiki, zipping through the sky on her broomstick, seamlessly merges into the V-formation of a flock of migrating geese. Itâ€™s only brief, but this shot reveals two essential aspects of Miyazakiâ€™s work. The majesty of flight has always been a point of fascination for him, from sketching planes in his youth, to his â€˜finalâ€™ aviation-themed epic The Wind Rises, via numerous thrilling flight scenes across his oeuvre. And, of course, thereâ€™s the porcine flying ace adventure, Porco Rosso.

Yet even more important than the pure aerial spectacle is the projection of a vision of humanity; magic and nature operating in harmony. In the skies above Korico City, a world that feels so full and lived in, it seems strangely achievable.

When Suzuki asked some children to draw a map of their hometowns, and then one of Korico City, he was surprised by the results: â€œThe surroundings they lived in held no sense of reality for them. But they were happy to draw a map of a movie locale, and it was accurate.â€� Suzuki had mixed feelings about this, but itâ€™s a testament to his and the studioâ€™s skill at designing beautiful, memorable worlds. If you could draw yourself into your town, or one designed by Studio Ghibli, itâ€™s not going to be a hard choice. Pass me the blue and green crayons.

In the mid â€™80s, the anime stable was struggling following back-to-back box office flops. All that changed with the arrival of a young witch.
The post How Kikiâ€™s Delivery Service saved Studio Ghibli appeared first on Little White Lies. […]