If there were ever a right time to open an upscale plant-based restaurant serving healthy eats in Orlando, itâ€™s certainly now.

With â€œwellnessâ€� becoming the most commodified buzzword on the planet and more chefs and restaurants embracing entrÃ©es that give veggies a starring role, timing is on the side of Proper & Wild.

The restaurant, which opened up this past January, is the creation of husband-and-wife team Jamie and Chelsie Savage, who also own Colonialtownâ€™s The Sanctum Cafe. Like Sanctum, Proper & Wild focuses on meatless dishes that are plant-centric. Here, the produce is local; preservatives, artificial dyes, and refined flours and sweeteners are forbidden; and ingredients are organic when possible.

My friend and I arrived at the Winter Park restaurant on a weekday evening and were seated at a small table in the dining room. The space was chic with a glossy bar, greenery and the option to sit street side if the weather permits. 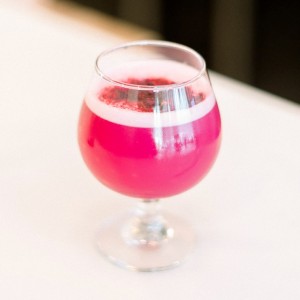 For our first round of drinks, we ordered two cocktails: the Heartbeet ($10) and Lifeâ€™s a Peach ($10). The Heartbeet consisted of Yuki Otoko sake, Cocchi Rosa, beet, super berries, rose, lemon and aquafaba (liquid left over from cooking legumes like chickpeas). It was mildly sweet with a lovely rose flavor and a velvety texture thanks to the aquafaba.

The Lifeâ€™s a Peach, made up of Yuki Otoko sake, CVNE Monopole white wine, Dolin Blanc vermouth, local peaches, cinnamon, lemon and cayenne, had some real spice to it. The cinnamon was a little overpowering, while the cayenne hit at the end of each sip. My friend said the spices were enough to clear her sinuses.

For our appetizers, we chose the Popcorn ($4) and the Chickpea Fries ($9). Popcorn is a bit unorthodox for a restaurant to serve but I never pass up the opportunity for this movie theater snack. It was heirloom corn popped in organic coconut oil and spiced with red miso, which gave the light, fluffy flakes a nice kick. The bowl was rather big and we ended up snacking on it throughout our entire meal.

The Chickpea Fries resembled those French toast sticks you get from the frozen foods section of the supermarket but they were so much better. The texture was soft and buttery and they were perfectly complemented by vindaloo curry almond aioli and cilantro pistou. I could have ordered three rounds of this appetizer.

For entrÃ©es, we shared the Stella ($15) sourdough flatbread and the Spicy Makhani Curry ($18). The flatbread was topped with shaved Brussels sprouts, garlic, Gouda, truffle, lemon and red chili flakes. My friend said she wished the flatbread had a little bit more cheese to cut the acidity of the lemon and sprouts but overall we enjoyed it and ate the whole thing. 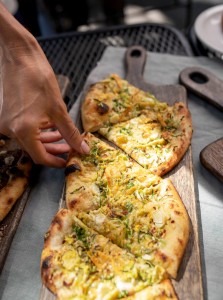 The curry was filled with sliced king oyster mushrooms, lentils and wild rice, with a dash of coconut raita. The flavor was on point with warm spices and a creamy sauce. Although, I would have liked for it to have had more rice and lentils as there was so much sauce that it resembled a soup. We ended up ordering a side of House Pita ($3) to try to scoop up the rest of the sauce and temper its spiciness.

For dessert, we chose the All the Above ($17) sampler, which came with a chocolate mousse cake, a dark chocolate truffle, and a passion and orange flavored custard. While all three were delectable, the chocolate cake, which was made with avocado and chocolate, had an amazing texture, while the custard was bright and creamy.

At this point we ordered some hot beverages: the Drip Coffee ($3) and Chai Tea ($4.50). Sourced from Central Floridaâ€™s Golden Hills Coffee Roasters, the drip coffee was an ideal pairing for our desserts, while the chai tea was creamy and warmly spiced. Itâ€™s worth noting that Proper & Wild is very accommodating to those who are lactose intolerant with almond, hemp and soy milk available. Vegans and gluten-free eaters will also be happy to find that the menu clearly marks what they can and cannot eat.

Diners looking for healthy, meat-free meals should not skip Proper & Wild. While sometimes I find that vegan or vegetarian dishes leave me wanting, those served up by this upscale eatery are satisfying all on their ownâ€”and judging by our selection of dishes and drinks, no one could accuse them of being underspiced. Other restaurants looking to incorporate more plant-based menu items should take note: Proper & Wild is leading the way.

Leading the way in upscale plant-based cuisine, Proper & Wild offers diners healthy, satisfying plates. If there were ever a right time to open an upscale plant-based restaurant serving healthy eats in Orlando, itâ€™s certainly now. With â€œwellnessâ€� becoming the most commodified buzzword on the planet and more chefs and restaurants embracing entrÃ©es that give [… […]