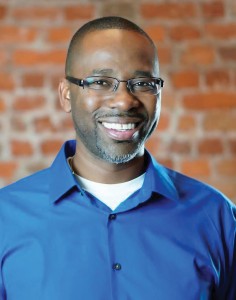 Orlando comedian Ken Miller on getting into stand-up, winning Steve Harvey’s spotlight contest and being a big college basketball fan.

1. I was always a funny kid. So I told all my friends that when I got old enough I was going to be a stand-up comic. I used to listen to Richard Pryor cassette tapes as a kid and I told myself I’m going to be Richard Pryor when I grow up. Now that I’m 42, I realize that I probably shouldn’t have listened to Pryor when I was 10 years old.

2. Getting into comedy was easy for me. All you have to do nowadays is go to an open mic and get started. Being funny on a consistent basis is the hard part. I was always naturally funny but turning naturally funny into stand-up is hard. I know people who are very funny people but they can’t do stand-up. Being the funny guy in the office isn’t the same as being a funny comedian.

3. I moved to Orlando after serving in the U.S. Army for nine years. My wife at the time was from Orlando so we decided to make our home here after living near Washington, D.C., where I had worked in the White House for five years. We moved here in 2004 and I started working for Nextel Communications, which is now Sprint. I have been working for Sprint for 15 years and doing comedy for 13 years.

5. My favorite sport to watch is college basketball. I’m a huge University of North Carolina (UNC) Tar Heels fan. I had three cousins play college ball there. I also have a UNC tattoo on my arm.

6. I met my wife at Sky 60 Lounge, now called Aero, in Downtown Orlando. The story of how we met is long and funny but here is the short version: We told everyone that night we were getting married and we did five years later. We have now been married a little over a year.

7. I have 2 ½ kids. A 19-year-old, a 14-year-old and an 8-year-old. The 8-year-old is my children’s baby sister from their mom’s side of the family, but I consider her a part of my family so I call her my little ½ kid. Being a parent is not what anyone expects. No two kids are the same. You can raise them exactly the same and they will grow up to do the total opposite of what you taught them.

8. My go-to dish to cook is Jamaican-style oxtails and yellow rice. I love to cook and, right now, I am addicted to my pressure cooker. We got a pressure cooker for a wedding gift and it sat in our garage for over a year. I finally opened it two weeks ago and I have been using it every day. I haven’t used my stove in two weeks.

10. It was amazing to be recognized by Steve Harvey in his spotlight contest for stand-up comics. I cried when I found out. I was actually in Best Buy and I got a call from another comedian telling me I won. I replied back, “Won what?” He said, “You won the Steve Harvey contest.” I fell to my knees and started crying in Best Buy. I called my wife and I said, “I won.” And she said, “Won what?” I said, “I won the Steve Harvey contest.” She started crying. I went to watch the video on Steve’s Instagram and when he said my name, I got emotional again. It’s a great accomplishment for me as a comic.

Orlando comedian Ken Miller on getting into stand-up, winning Steve Harvey’s spotlight contest and being a big college basketball fan. 1. I was always a funny kid. So I told all my friends that when I got old enough I was going to be a stand-up comic. I used to listen to Richard Pryor cassette [… […]