Winter Park author Owl Goingback on joining the military at 17 years old, weaving indigenous culture into his writing and his award-winning novel. 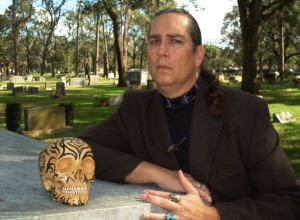 1. When I was a kid, I wanted to be in the Air Force more than anything else. I knew the military would give me an opportunity to travel and see the world. I joined when I was 17 and was living in Spain a month after my 18th birthday. I spent most of my enlistment in Europe and the Middle East, which proved to be quite an adventure.

2. I started writing in middle school, trying to create the kind of stories I liked to read, but I put aside all literary endeavors when I joined the Air Force. It wasn’t until I got out of the military that I resumed writing.

3. When I was growing up, authors such as Ray Bradbury, Edgar Rice Burroughs and H.P. Lovecraft inspired my imagination by taking me on strange and wonderful adventures. Books gave so much to me; I wanted to give something back by writing stories of my own for others to read.

4. I consider myself a modern version of a traditional Native American storyteller, because I often weave indigenous culture, folklore and teachings into the things I write. It’s how our elders used to teach a long time ago: Take a bit of knowledge, a lesson, and wrap a story around it. That way you are entertaining and educating at the same time. Because of the teaching elements, several of my horror novels have been used for a youth offender program at the Orange County Correctional Facility.

5. I love to take day trips to explore Florida’s small towns and out-of-the-way locations. My favorite spot is St. Augustine because the town embraces its history and ghostly legends. I love the historic city so much I used it as a setting for my novel Breed.

6. My all-time favorite television series is the original Outer Limits. The show combined science fiction and horror, two of my favorite genres. Outer Limits always reminded viewers that the universe is an enormously big place, and humans know very little about it.

7. I’ve always had a love for all things scary, probably inherited it from my mother and grandmother. The first book I remember reading was a ghost story.

8. Halloween is my favorite holiday. What other celebration lets us embrace ghosts, goblins, witches and things that go bump in the night? Halloween allows children to use their imagination and dress up in character, participating in a social event that takes place on the doorsteps of neighbors’ homes and the sidewalks in between.

9. I write fiction, but I read mostly nonfiction. I am always on the lookout for unusual historical facts, and bits of local folklore, something that can be used in a story.

10. My novel Coyote Rage recently won the Horror Writers Association’s Bram Stoker Award for Superior Achievement in a Novel. The book follows the original trickster from Native American folklore, Coyote, and his attempt to kill the last representative of mankind on the Great Council. Eliminate the last human member of the council, and mankind will lose power in this world and animals will once again rule. The story uses the city of Sanford, the Greenwood Cemetery in Orlando and Big Tree Park in Longwood as settings.

Winter Park author Owl Goingback on joining the military at 17 years old, weaving indigenous culture into his writing and his award-winning novel. 1. When I was a kid, I wanted to be in the Air Force more than anything else. I knew the military would give me an opportunity to travel and see the [… […]