We recognize the local health care heroes that have gone above and beyond in the fight of their lives.

The word hero holds a special meaning when you are talking about the countless health care workers locally and across the globe that have risen to the occasion and worked tirelessly to try and combat the COVID-19 pandemic. The unprecedented nature of this crisis has thrust these front-line workers into the unknown and while the experiences can be unnerving, these dedicated individuals keep putting up a fight. And so, we wanted to recognize all of the hard work they have done and continue to do as we look to regain a sense of normalcy in our lives.

We spoke with a few of the folks who have been making an impact during this time and providing hope in the face of such adversity. In addition, we also gathered several photos of the many others who have made noticeable contributions during this ongoing crisis. These folks are nothing short of amazing, and while they will tell you they are just doing their job and not looking for any accolades, please join us in celebrating them. They deserve that and so much more.

Answering the Call
Joe Bob Pearce has been with Nemours Children’s Hospital since it was built seven years ago and in that time he’s become “sort of an icon around here,” according to Nicole Johnson, director of critical care services.

The 64-year-old emergency department charge nurse is beloved by his colleagues and the families he encounters for his friendly manner and sense of humor. But when the COVID-19 pandemic arrived in Central Florida, Pearce was hardly in the mood for joking. Recognizing the severity of the situation, he quickly leapt into action and created a new system that would allow for families to be screened for coronavirus in the parking lot.

In concert with guidelines handed down by the Centers for Disease Control, he also devised a plan that would escort those experiencing potential symptoms of the virus to an isolated area of the hospital. That proved to be crucially important as it not only allowed for patients to be seen quicker, it also prevented other non-coronavirus patients as well as those treating them from possibly being infected.

While he’s been lauded for his efforts, Pearce is still trying to process it all. “You set up a system that is totally alien to anything you have ever known and the team jumps in. Every moment of every day with all the changes, the team rolled with it. … Having families stay in the car with their children as we screened them through the window or open door was nuts.

“I am a 64-year-old registered nurse who has been at the bedside for 44 years and this pandemic is very surreal,” he says. “As a nurse, you [rely] on evidence based research, and in the case of COVID-19, there was minimal if no data and things were changed on the fly. I found myself mentally crossing my fingers and taking a leap of faith. … There has been nothing like this in my career or life.”

Due to his age, Pearce is considered high risk, though he admittedly says he doesn’t feel like it and tries to keep a positive outlook through everything, especially for the many children he comes in contact with and who inspire him every day.

“We had on hats, gowns, gloves and looked like monsters to the kids,” Pearce says. “The kids did not slow down being kids and that was great to watch.”

It was just another example of why after all these years he’s constantly amazed by children’s ability to keep things in perspective without letting it damper their spirits. It drives him to be better on a daily basis and is the most rewarding aspect of what can be, at times, a very emotionally draining and difficult job.

“I work in pediatrics because of the resiliency of the kids,” he says.

A Better Way
At the early stages of the COVID-19 pandemic, health systems across the country were all vying for the small amount of global testing available, adding to the challenge of trying to combat the virus. Furthermore, the results of those tests took several days to materialize, which only caused further frustration. A team from Orlando Health knew there had to be a better way. 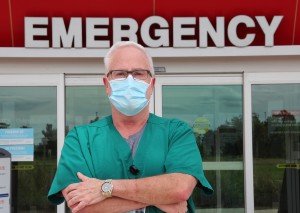 Drs. Wang “Steve” Cheung and Raymond Franklin, vice chair and chair of Orlando Health’s Department of Pathology respectively, began talking at a peer’s wedding about the need to produce better testing. Cheung was confident that thanks to the years of experience in molecular biology amongst their colleagues, they had the resources to do something special. Nevertheless, it would require a perfect storm of expertise, dedication and lots of luck to pull off.

“That’s what we do, we create stuff and develop new testing,” Cheung says. “Just looking at the protocol from the Centers for Disease Control, I felt very confident we could do it. We knew we had the technicians to help us. The biggest hurdle was not could we do it, it was could we get the reagents, the instruments and everything that we need to do the test.”

Cheung discovered that they had an instrument in which the software could be hacked and customized to identify any sequence. Within a matter of weeks, a team came together to create a groundbreaking in-house coronavirus test that could produce results within 24 hours.

“I’ve never done anything that was such high pressure, in terms of the importance,” Cheung says.

While so many were competing against other health systems from across the country, not to mention those in Europe and Asia, the ability to have a reliable test that could provide expedited results was a pivotal moment that allowed for better clinical decision-making, logistical planning and determining how a limited supply of personal protective equipment (PPE) could best be used.

“The primary question to be answered for every patient is: Are they contagious with the COVID virus? With this test, we were able to give them this info in more or less real time,” Franklin says. “Without the knowledge of whether a patient is infected, you are working blind and assuming everyone is infected. [Prior to this test] results would come back two weeks later. The information is not useful at that point.”

Both Cheung and Franklin are quick to point out the many others that played key roles in helping to get the test up and running. It was a 24-7 endeavor and a “constant source of marvel to me,” says Franklin.

“You can’t underestimate the skill and dedication of the technologists who were doing the actual physical work to make the test,” he adds. “There were so many fail points that could have derailed this whole process.”

Though not that far removed from the breakthrough, Cheung says it feels like years, not months since the intense work began.

“You can do your [normal] experiments and no one’s life is depending on it. There is no time frame that it has to be done by today or tomorrow,” says Cheung. “But this was like you were in a movie; we never thought we would have to do something like this in real life.

“The fact that everything worked was a miracle. I think about it sometimes and I can’t believe we did that in such a short amount of time.”

A Positive Impact
To say being a registered nurse brings great joy to Shaevoun Ogarro would be a bit of an understatement. Driven by a desire to want to help those who need it most, for the past three years she’s worked as part of AdventHealth’s PCU clinical transition unit after graduating from AdventHealth University in 2017. In that time, she’s learned a lot about caring for others and that experience, albeit brief, served her well when the coronavirus pandemic arrived.

When Ogarro discovered she would be working in a COVID-designated unit, she was understandably nervous. But once she began to care for patients, instincts kicked in and it all became second nature. 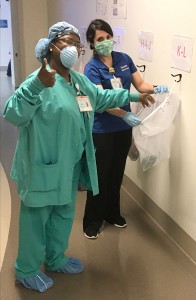 “To be honest, I overcame my fears by just being with these patients” she says. “A lot of them, they are restricted from seeing family members and the only face they see is the nurse. When you go into the room, you are their only human contact. You realize how lonely they are; they are human beings like I am. I said, let me put my fear aside, and be their friend.”

Ogarro says she tried to keep spirits up by being a confidant and someone to lean on when times seemed rough and found that her calm demeanor helped reduce anxiety levels. She formed a special bond with her very first patient, a woman who was on her way to recovery when she suffered a setback that began to weigh on her mentally. Seeing that she was downtrodden, Ogarro sat with the woman in her room for more than 10 minutes so they could talk—as friends.

“She told me about her husband, her grandkids—she was missing her family,” says Ogarro. “Just me talking to her and sitting on the bed and letting her know, ‘I’m here to listen to you;’ that gave her comfort.”

It wasn’t long after that shared moment that Ogarro was able to wheel the patient out of the hospital into the waiting arms of her elated husband. Seeing the couple reunite in a joyous manner was as rewarding as it gets for the young nurse.

“It lets you know the efforts you are putting in, that the patient is benefitting from it. I was there from the beginning to the time she was able to go home to her family,” Ogarro says.

Those kinds of experiences along with the overwhelming level of public support have helped Ogarro manage the stress of the job. She jokes that she’s gained weight as a result of all the food being sent to the hospital and she loves looking at the many drawings sent in by area children.

“They are a daily reminder that even though I am exhausted, I am doing something positive. I know why I am doing this, on the back end there is someone who is appreciating what I am doing,” she says.

In addition to the support of the public, Ogarro points out how hospital management has been there every step of the way with a hands-on approach that has inspired her to come to work. And to know that she’s making a real difference, especially during such a historical time, is exactly what fulfills her about being a nurse.

“I signed up to be a nurse to help people and God has put me in this position to better people’s lives,” she says. “Just because we are in the middle of a pandemic, that hasn’t changed.” 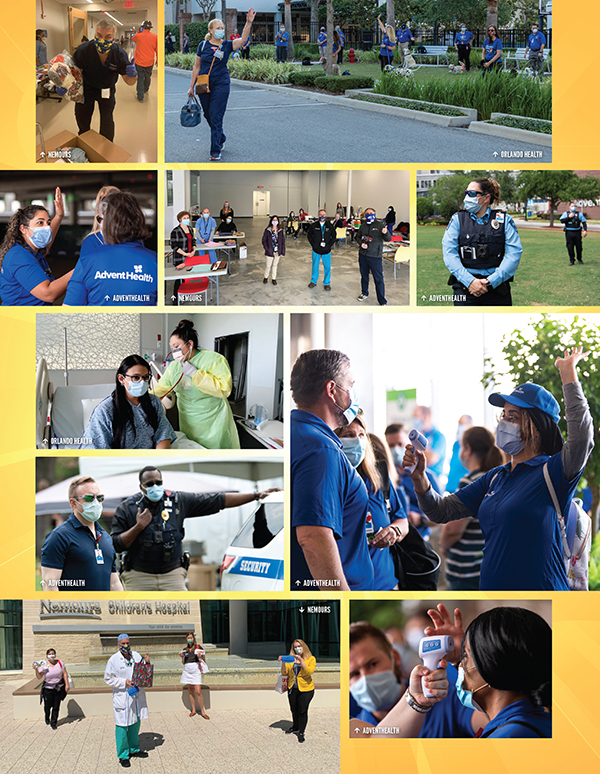 We recognize the local health care heroes that have gone above and beyond in the fight of their lives. The word hero holds a special meaning when you are talking about the countless health care workers locally and across the globe that have risen to the occasion and worked tirelessly to try and combat the [… […]