Forty years of harsh Pennsylvania winters can take a toll on anybody, especially someone like Jim Culp, who doesn’t have much tolerance for blizzards and blustery conditions. His decision to move to Central Florida in 2020 wasn’t entirely based on the weather, of course, but it certainly was one of the main motivating factors. In fact, when he was packing up his home outside of Philadelphia, there was one item in particular he was thrilled to be leaving behind.

“I had a really nice snow blower and I gave it away the day that I moved,” he says with a laugh. “That was one of the best days of my life. I was so fed up with the cold.”

Lifelong New Jersey resident Mike Hanan felt the same way, which is why Florida was his go-to vacation spot year after year. Lounging on the beach in St. Petersburg in 2021 with his wife Lauren, they looked at each other and suddenly a light bulb went off. Why not make it permanent and move down?

They took the plunge this summer for multiple reasons, not the least of which was the chance to soak up the sunshine all year long.

“I’ve never been a fan of cold weather,” Hanan says. “Usually I just hibernate in my house for the most part during the winter, and then when spring and summer come along I’m so busy because I try to jam everything into one [time of year]. I’m looking forward to an endless summer.”

Florida’s beautiful weather and abundance of outdoor activities have been major draws for decades, and it’s no secret that the state has long been a haven for retirees. But it’s not just for Grandmom and Grandpop anymore—Culp and Hanan are both in their early 40s, and even younger generations are embracing all it has to offer.

Florida ranked second among all states in population growth last year, trailing only Texas, and many of those transplants have gravitated toward Central Florida, despite a competitive housing market marked by skyrocketing prices and high rental rates.

Philadelphia native Erica Lawrence and her husband Joe (their names have been changed because they wished to remain anonymous) were raising their young daughter in New Jersey but had long been contemplating a move to Florida. They were finally inspired to act this past winter.

“We always talked about retiring at some point and going south, and we thought whenever our daughter graduated from high school would be the easiest time,” she says. “We love warm weather and every winter that goes by we say, ‘Why are we still here?’ We get so depressed when the whole family is stuck inside, because we’re all outside people. My husband’s job went fully remote in December and he got the opportunity to work from anywhere, so we started really considering it.

“Our daughter is only in second grade, so we thought if we did it now then we could avoid her getting serious with all of her relationships. … That was a huge decision—it was either now or in 10 years. We looked at each other and said, ‘Can we wait until she graduates high school?’ And we both said, ‘No.’”

The Lawrences moved this summer about 90 minutes outside of Orlando, and aside from the weather there are other aspects they are looking forward to.

“When we were going through COVID we talked about how we didn’t love the politics in New Jersey anymore and how things were handled, and just the direction that Jersey was going,” she says. “That was another impetus for us to consider it more, because Florida was a lot more open. … The taxes are crazy in New Jersey too. My husband is a veteran so he gets even more of a tax break in Florida, so it’s going to be substantially less. We’re very excited about that. There’s also no state income tax so the paycheck is going to be nicer.”

Hanan also cites the high property taxes in New Jersey as a reason for his move, but his original plan was to stick it out for five more years, until he saw how bidding wars were driving up the home prices in his area.

“That was the main thing that turned it into a one-year plan,” he says. “We actually did a refinance a couple of months back and we got our house appraised. … We decided now was a good time to get a good price for the house so we put it on the market, we showed it for a day and started getting offers. So we decided to sell high, ride it out and rent for a little bit, and then buy when the market comes back down, but we actually ended up buying sooner than we thought.”

The Hanans were able to take the money from their sale and use it as a down payment on a home in the Tampa area. He had already been working remotely for years and she found a job in her field in Florida.

The ability to work remotely has been a game-changer in allowing people to move to different parts of the country, but Josh Burkhardt stresses that it’s not entirely necessary when considering Florida. Also a native of New Jersey, he has been living in Vero Beach for the past seven years and had just turned 24 when he first arrived, inspired to escape his small hometown and experience something different.

“The one negative feedback I was receiving at the time when I was telling my friends that I was going to be moving to Florida was that there were no jobs in Florida,” he says. “But I had no issues. Within the first month that I moved down here, I had four or five interviews already lined up. I had a job within a month.”

Burkhardt works in IT, ironically for a company based in New Jersey. He adds there are plenty of opportunities available in Florida in both white-collar and blue-collar jobs.

“This is just based on statistics, but more people in the North and specifically the Northeast have college educations, so if you’re a younger person and you’re moving to a Southern state and you have an education, that’s going to separate you from other individuals,” he says. “But if you don’t have a bachelor’s degree in an in-demand field, you’re still probably better off down here because there’s so many labor jobs with the development they’re doing [along with] landscaping and pools. Everything is year-round here; in New Jersey, things shut down. I have buddies who are in unions and in the winter they just sit back and chill because there’s not much they can do, but down here it’s year-round because the weather allows it.”

Burkhardt’s sister has since moved to Florida as well and his father has a house in the state that he will eventually retire to. He also convinced two of his best friends, 31-year-old twin brothers Matt and Mike Lavin, to give the Sunshine State a try.

Matt came down first in 2017 and hasn’t even been back home to visit. He has found the stability he was looking for and loves the warm weather, and can put up with the fact that the pizza and sandwiches aren’t exactly what he’s used to.

“Before I moved here I used to tell people that I loved Jersey because of all the different seasons, but moving here made me realize that you can’t beat good weather all year round,” he says. “I don’t miss the cold weather at all.

“It’s been a lot of fun. I’m really happy with my job and living in Florida. I got a dog when I moved down here and I go to the dog park often, and I can golf whenever I want to. I love Jersey, don’t get me wrong, but Florida will forever be my favorite state. Everything just worked out when I moved here. I don’t know if it was a coincidence but it’s just a much happier place to live.”

New England and states like New York, New Jersey and Pennsylvania have long fueled the migration to Florida, and that hasn’t changed. “It’s funny, whenever I meet somebody they say, ‘What part of the Northeast are you from?’ We meet people from Jersey, New York, Long Island,” Culp says.

But Midwestern states also have a strong foundation in the area and local realtors are working with buyers from more than just the Northeast. 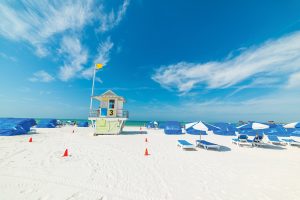 “People are coming from all over,” says Christy Clark-Weber, broker and owner of Southern Heritage Realty. “We’ve always had a huge influx from New York and New Jersey, and I’ve sold to several people from those states, along with Virginia. But it’s everywhere, really. We get a lot of people from Brazil and even China. There’s a whole neighborhood I know that is new construction and it’s 30 families from China. It’s interesting, it really is.”

“Because we are a global company, we get leads from everywhere,” adds David Dorman, realtor, broker and owner of Century 21 Professional Group in Ocoee. “Over the past year, I’ve worked with people from Seattle, New York, New Hampshire, the center of the country, and even out of the country. It’s a mixed bag. I sold five houses last year without the people even meeting me in person. I couldn’t buy a property that way, using a FaceTime camera, but I sold five houses that way.”

Clark-Weber says safe, walkable communities like Oakland, Winter Garden and Ocoee are in high demand, and transplants from out of state also love the endless entertainment options throughout Central Florida along with being a short drive away from the beach. Burkhardt has a season pass to Universal and he and the Lavin brothers come to Orlando often, especially when friends and family from New Jersey are on vacation.

Culp, his wife and their two kids could not be happier with their home in Kissimmee, where they watch the fireworks from the Magic Kingdom on their back porch almost every night. “Usually every Friday my wife has a half day and she takes them to one of the parks,” Culp says. “They’re all right here and we have passes for all of them—Disney, Universal, SeaWorld. I’ll meet them there after work and we’ll have dinner, then we’ll come home and do bedtime. It’s awesome.”

But getting a chance to ride Space Mountain on a regular basis is not the only reason he’s enjoyed the move. Culp’s company, Cancer Diagnostics, offered him a chance to transfer to Florida and continue working as a sales rep, and he also has a side gig as a standup comedian that is starting to pick up steam. His daughter and son have thrived in the Celebration School District and are easily making friends. In short, they have not regretted leaving their home state behind, and when they do miss Pennsylvania, it’s only a short flight away.

“Florida gets a bad rap and I know it’s the butt of a bunch of jokes, but it’s been great,” he says. “We’re all loving it here.”

Florida continues to be one of the country’s leaders in population growth, as warm weather, entertainment options and low taxes are helping to drive the migration south. […]