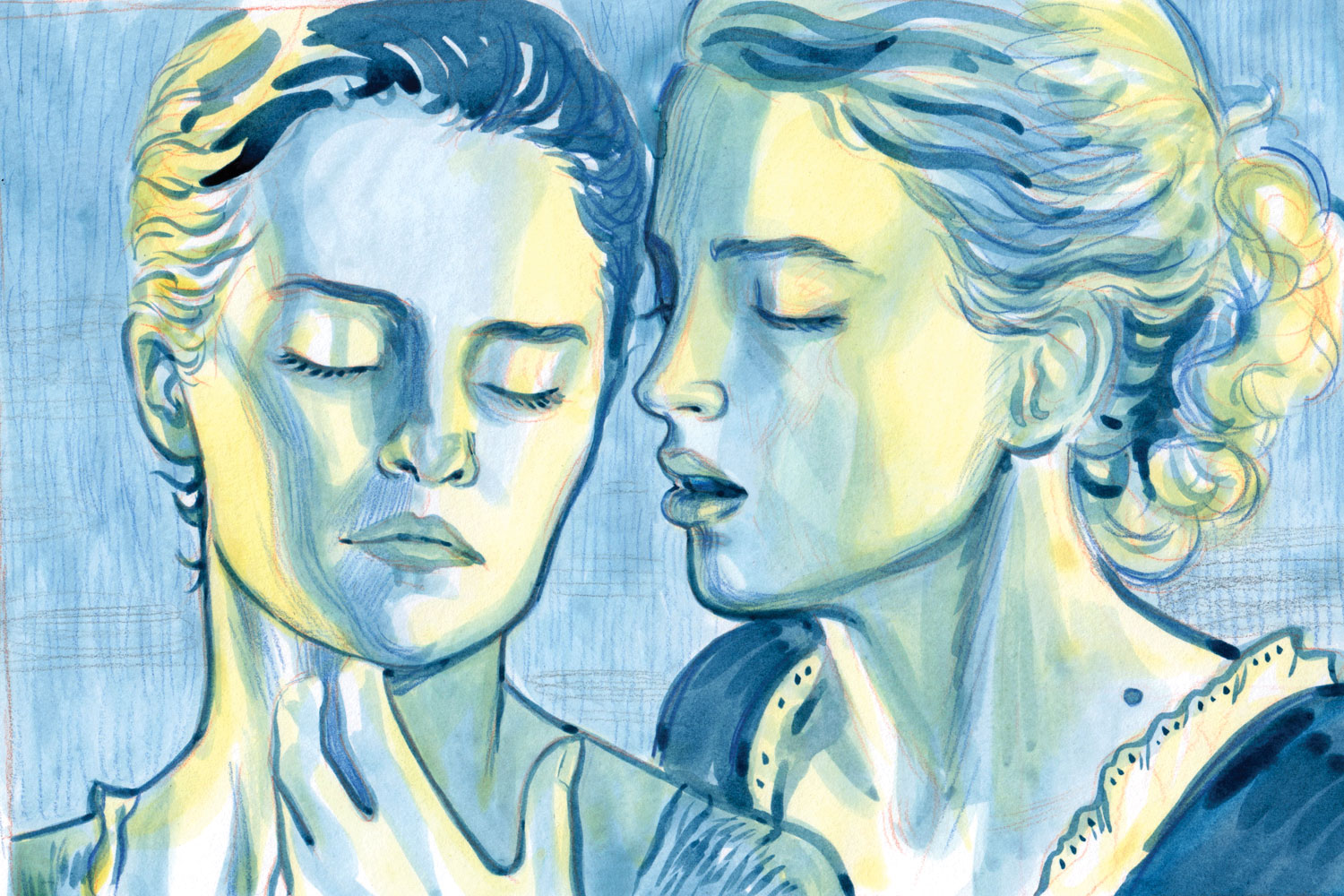 Twelve years after their first collaboration Water Lilies put them both on the map, Céline Sciamma and Adèle Haenel combine their talents again in Portrait of a Lady on Fire. The latter plays Héloïse, a woman stifled and immobilised by the demands of 18th century society, and by the objectifying gaze of Marianne (Noémie Merlant), the artist hired to paint her portrait.

But it isn’t long before Héloïse disrupts this unfair balance: together with the two actresses, Sciamma crafts a queer romance between artist and ‘muse’ that defiantly resists the morbid, ‘romantic’ dynamic of dominance and subservience. Here Haenel and Merlant reveal how they approached their respective characters.

LWLies: Your characters are placed on an equal footing in the film and in their romance, but they are also quite different from each other. How did you approach them?

Adèle Haenel: I didn’t take into account that difference, actually. Because I think that the difference is born of the fact that we are different. I just took position according to my ideas, and I told myself that since they were my ideas, they wouldn’t be Noémie’s.

Noémie Merlant: I told myself that I would look at Héloïse initially in the most neutral way possible, because that’s in the story. I imagine that when Marianne paints, she tries to maintain a neutral approach, to look through the person and draw them. I didn’t take into account this contrast of where the characters come from.

AH: Independently, we each worked on our characters. I worked on posture most of all. In what I’ve done before in my career, I was very mobile, making quick movements. When I started this film, my big thing was that I had a cape, so I thought I was a sort of Japanese princess. That was the initial idea in my head. So I worked at creating an alterity almost in relation to my image from before. In reality, I don’t care, it’s not a question of image, but it was about reinventing myself. In that stillness, in that hieratic side of things. It was about speaking more haughtily, moving less, articulating ideas a little better.

NM: It was about quite concrete, physical things.

AH: Noémie had this thing where she would put her hands in her pockets, which would give her a very modern silhouette. Less corseted.

NM: And the pipe… And then there’s all the work of finding the gaze of the painter. There was preparation there. And then we let ourselves be guided by observation and by the intimacy that gradually appeared between us.

Héloïse spends a lot of the film being a subject of our gaze and of Marianne’s gaze. How did you deal with playing a character that we can’t access for quite a long time?

AH: That was intentional. It was a lot of fun for me. I do everything very seriously and I believe in what I do very deeply. I love art, I love cinema more than anything else. But I always work in a playful way, so I feel like I’m making jokes or pranks. So I told myself I would make a character who wouldn’t be a psychological unity, the way characters usually are – where they come from often leading to Freudian stuff, like, ‘I was traumatised my mum and dad and that’s why I am the way I am.’ It’s not that that’s not interesting, but it’s a bit annoying after a while. So I thought I’d make a character who didn’t have an internal principle, except for the joy of shooting the scenes, except for the emotions born from acting. No internal logic. It’s a character who is distorted by being looked at.

There is also something very physical about the film. It’s a costume drama, but usually in this kind of film we don’t see bodies that move. How did you bring this dimension into the film?

NM: As soon as we wear those heavy costumes and the corset, we automatically have a different demeanour. The whole weight that was put on women at the time comes automatically with those costumes. The characters, generally, are rather reserved in the first part of the film, and little by little, we’re going to break that and enter their intimacy. We’re going to see them laugh, joke, have conversations, discuss womanhood and art. Little by little, there is a truth that comes out of all this accumulated restraint. I think that came rather naturally because Céline was really trying to lead us to a most sincere and truthful place. It was the same for the bodies. Little by little, the costumes are removed or forgotten, we show something else with our bodies because the characters finally let themselves go.

AH: We deconstructed the corseted image and the prettiness that we inherited from that period, that image where the costumes only signify prettiness, as you can see in most costume dramas. We transformed the costume into something a little different. It’s composed of many things. It is beautiful, indeed, but it is also heavy, and it hinders movement. We wanted to show that dynamic. The classical costume drama will just show this idealised image, removing the social violence behind the costumes, removing what it means on the body – it’s just pretty. But in reality, that’s not how it is. Walking in the sand wearing that, honestly, it was a nightmare! We were on the sand wearing those dresses and heels, it was insane. It was our job to show that, to show the different components of those costumes.

One of the themes of the film is the relationship between the artist and the model, rejecting the idea of the ‘muse’ and furthering that of collaboration and equality. How is this idea reflected in your work with Céline?

NM: When I met Adèle and Céline, at the casting, I was wondering what my place would be because they knew each other so well. But in reality, once with them, I never once again asked myself that, because they were in that sharing, a horizontal gaze. We’re all there to try to create something, to try to make a great film, to try to make art, to be ourselves – and that goes through listening, through trust, through caring, and most of all through gentleness. I vividly remember, the first time Céline gave me acting directions, it was the softness of her voice, and the softness she set up in the crew. It’s a bit like in the film, an equality. We’re all here to make something in joy and not in pain, and to listen to each other. That’s how we can make something good. We are collaborators.

AH: Noémie’s arrival in our duo was essential. It wasn’t on the side, it entered at the heart of it and it changed the alchemy of things. Then, Céline and I have a collaboration that started twelve years ago, and it runs through everything: we made Water Lilies together, and then all the films we each made in our respective careers, we accompanied them. Each one of Céline’s films, I’ve accompanied them in their path; and all the film’s I’ve made, all the choices I’ve made, they’re also linked to my collaboration with Céline. So of course there’s a parallel to be made between our collaboration, and the artist-model relationship in the film.

There is this idea in the film of reclaiming the female artists who have been forgotten by history. What’s your take on this?

AH: I think it’s difficult to constitute oneself as a female artist because our story has been taken away from us. So we don’t have a reference. So of course, it’s hard to project yourself in a world where you feel pushed aside. At the Cannes Film Festival, in reality, there are only men. There comes a point where it’s normal that it affects the brain, and that it affects ambitions, self-esteem. So, of course, it’s in the film. But it’s not in relation to men, that’s what I mean. The film is absolutely female. Just like most films are absolutely male.

But we’re not in that perspective. We have a history that’s been taken away from us, and then we’re told, ‘Well, why can’t you do it?’ We’re already being beaten up in the present, and on top of that, we’re told, ‘It’s not hard!’ Well, I don’t think so. So yes, it’s important, but the film shouldn’t be put in a militant thing, because that’s undermining it. It’s a sensual film, it’s a film of cinema, it’s a film of fantasy, etc, but of course it’s political. We can’t help being political.

Portrait of a Lady on Fire is released 28 February. Read the LWLies Recommends review.

The post Adèle Haenel and Noémie Merlant on Portrait of a Lady on Fire appeared first on Little White Lies.

The co-stars of Céline Sciamma’s sumptuous period romance discuss the intimate – and political – nature of the film.
The post Adèle Haenel and Noémie Merlant on Portrait of a Lady on Fire appeared first on Little White Lies. […]