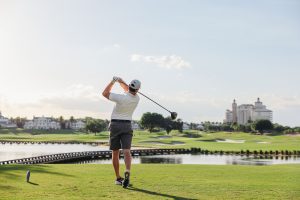 “Golf is deceptively simple and endlessly complicated; it satisfies the soul and frustrates the intellect. It is at the same time rewarding and maddening—and it is without a doubt the greatest game mankind has ever invented.”

Those words from the late, great Arnold Palmer ring true for many golfers, no matter if they are on the PGA Tour or those of us who are just trying to keep our ball on the fairway. With interest in the game at seemingly an all-time high thanks to the pandemic, we reached out to several area clubs, both private and public, from across the region to see what notable changes are taking place. While these advancements may not help with your swing or help you sink that 40-foot putt, they should at least provide a little more enjoyment the next time you plan to hit the links.

This popular club—more than 70,000 golfers tee off here each year—has added new GPS systems to its carts. And the club’s golf academy has revamped its Florida Elite Fitting Studio to now include TrackMan technology which uses simulation to monitor a golfer’s swing and ball tracking.

Designed by Rees Jones, this award-winning course stretches more than 7,000 yards from the back tees, providing players with plenty of challenges along the course of their round. Over at the highly regarded Falcon’s Nest restaurant, golfers can enjoy daily breakfast, specialty burgers and sandwiches for lunch as well as a special after-hours menu. The club is also home to an instructional golf academy helmed by PGA Master Professional John Hughes.

The product of designer Lloyd Clifton, this course is 6,911 yards from the gold tees and a par 72 with a slope rating of 130 and a course rating of 72.9. Some of the holes are more challenging than others, but each one will test your skill and shot making ability as you take in the picturesque surroundings.

A par-72 course that debuted in 1987, MetroWest’s greens are well maintained and surrounded by thickets of trees and spring-fed lakes with plenty of drastic elevation changes to keep you on your game. The club looks to get youngsters involved in the game early courtesy of its partnership with EduKaytion Golf with Kay McMahon, a member of the LPGA Teaching Hall of Fame.

There’s no shortage of ways to work on your game at this club that boats two championship courses, Crooked Cat and Panther Lake respectively. What’s more, you’ll also find a 42-acre practice facility complete with the “largest driving range in the nation” alongside a 9-hole executive course and a 22,000-square-foot putting green.

Golfers can play 54 holes at this club which includes The Legends, an 18-hole Arnold Palmer Signature Design that offers Scottish-style holes on the front nine and a back nine reminiscent of the Carolinas. Meanwhile, The Reserve is a shorter 18-hole course that shares space with preserved wetlands throughout. 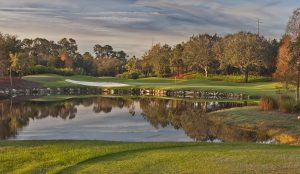 Bella Collina’s Nick Faldo-designed golf course is the centerpiece of this 1900-acre gated community and it feels far removed from its surroundings. Dramatic elevation changes and sweeping dunes further differentiate the course from its counterparts as the design perfectly uses the property’s natural landscape to test you at every opportunity. After the round, the 75,000-square-foot clubhouse includes dining options, a spa, a fitness center along with a wine cellar and humidor.

Those teeing off at this Joe Lee-designed course will surely enjoy the Mickey Mouse-shaped sand trap on hole No. 9, part of a $300,000 renovation of all the bunkers that took place a handful years back. Those who are members of the Disney Vacation Club as well as theme park passholders are able to enjoy special discounts with greens fees.

In the coming months, this course will undergo an improvement project led by Arnold Palmer Golf Management and Ken Baker, the head of golf course design at One Club Limited. Holes 14 through 17 will be updated with location shifts, added distance and other enhancements. Future plans call for a full reconstruction of all 18 greens.

Designed by Joe Lee in 1971, and completely redesigned in 2013 by Arnold Palmer Design Company, half of the holes on this championship course feature water hazards and golfers will have to do their best to avoid any one of the 59 bunkers they’ll encounter along the way.

This course is unique to the area because of its varying elevations, abundant wildlife and protected wetlands. As a Certified Audubon Sanctuary, you’ll find osprey poles and birdhouses installed around the course that are home to wood ducks, eastern bluebirds and flying squirrels. In managerial news, the club announced the promotion of Kristy Bennett as its new director or club sales.

This par 70, 6,200-plus yard course spanning more than 220 acres at the Orlando World Center Marriott is a draw for its scenic backdrop, carefully-sculpted fairways and rolling greens which are touted for their speed and consistency. A few holes have recently been redesigned, including the 204-yard, par 3 island green on No. 18.

Now under the ownership of Hilton Grand Vacations, Mystic Dunes is in the midst of making some upgrades to its golfing experience. New carts have arrived, parts of hole No. 10 have been resodded and a new roof was put on the clubhouse. In the fall, the wood face bunkers are scheduled to be redone along the course that mixes both classic Carolina style with characteristics of a British links course.

Players love this Greg Norman track that is enhanced by surrounding wetlands and other noticeable natural elements. Later this year, the club will once again host previous winners of Major Championships and members of their families when the PNC Championship takes place Dec. 15-18. On the dining side, Chef John Tesar’s steak and seafood restaurant Knife & Spoon received a coveted Michelin star in June. 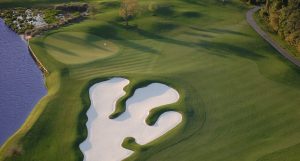 Situated on 2,300 acres, Reunion Resort has lots to offer by way of its three signature courses designed by the likes of Jack Nicklaus, Arnold Palmer and Tom Watson, not to mention its resort-style accommodations, spa, 10 community pools and dining options. Reunion recently welcomed the Golfzon Leadbetter World Headquarters to the property and in the fall will see the opening of the Golfzon Leadbetter Golf Academy. The resort has also added a new children’s food and beverage station to its five-acre water park and its tennis complex has been updated with four additional pickleball courts and the resurfacing of all six of its clay tennis courts.

Originally making its debut in 2003, this course was reimagined a handful of years ago by the Arnold Palmer Design Company. Designer Thad Layton set out to break from the stereotypical resort golf course and create something that would challenge golfers of all levels. With varying green shapes and lots of contour, precision is key and strategy often comes into play while navigating the fairways in search of the cup.

Hammock Beach is home to two courses designed by Tom Watson and Jack Nicklaus and offers idyllic views of the Atlantic Ocean. Recently, the club received an $800,000 equipment package for its golf course maintenance team to help them elevate playing conditions of both courses. Elsewhere on the property, a brand new pizza and gelato shop are being added along with a family arcade, a boutique surf shop and a multi-functional outdoor deck that is slated to open in October.

Mission Inn is home to two championship courses—Las Colinas and El Campeón, the latter of which is one of Florida’s oldest courses and has been selected as the U.S. venue for the PGA Tour Latinoamerica Qualifying Tournament as well as for PGA Tour Canada’s Mackenzie Tour. Those looking to improve their game can spend time on the large range and putting green or receiving instruction at one of the three on-site golf schools.

A closer look at some of Central Florida’s finest golf clubs. […]